If you’re a fan of the pod-race sequence in Star Wars: The Phantom Menace, then you might like that KOEI has up its sleave. Developed by KOEI’s new studio in Toronto (why can’t game companies ever come to Ottawa?), Fatal Inertia screenshots looks very much like the pod-racing scenes. The game is expected to be a release title for when the PS3 hits in the spring of 2006. (Everybody keeps saying spring 2006, maybe that’ll make it true!) IGN says:

Officially described as “a contrast of vibrant, futuristic vehicles battling and racing in a variety of beautiful, natural environments,” Fatal Inertia is a 23rd century sport that mixes street racing, rally racing, and demolition derbies and is also said to have six main goals: 1.) to have a realistic world based on physics, 2.) to have a variety of physics-based weaponry, 3.) to boast completely customizable vehicles, 4.) to entertain a large variety of game modes, 5.) to show off several nature-based stages, and 6.) to thrill gamers in multiplayer battles. 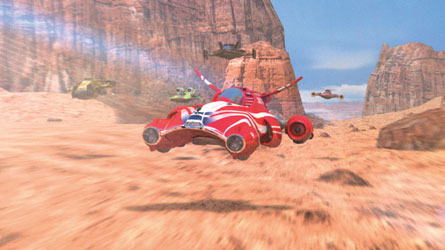 Imagine shooting a missile to cause a landslide on an opponent. Or to close off a canyon behind you. Or, or, or! The possibilities, man! Don’t believe me? Right from KOEI:

The foundation of Fatal Inertia is its physics engine, which uses the power of the PS3 to create weapons and environments that are unlike anything seen before. The beautiful natural environments aren’t just scenery — they are there to be used in combat, and rock walls can quickly become avalanches to use against your opponents. You’ll have unparalleled freedom, and with all the possibilities the physics-based engine has to offer, you’ll never have the same play experience twice.