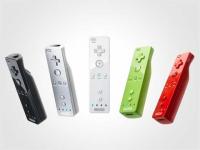 So what do you think? Lots of the talk these days is that the PlayStation 3 (PS3) and the Xbox 360 will duke it out, and that the Nintendo Revolution will quietly mop up the pieces. Gates himself seems to dismiss the Revolution out of hand, saying that the race is between the PS3 and the 360.

I hope not. I find that three combatants is much better than two. There might be two front-runners, but the third party will keep the other two honest, so to speak.

Nintendo is where lots of the innovation is happening these days. Sure, I admit it. Sony does some good stuff too, but it’s more a matter of better execution. (And same thing goes for Microsoft.) But Nintendo is where all the cool stuff happens. Just take a look at their new controller. It’s cool. It really is. And I can’t wait to try it out. With one proviso (and here’s the rub): as long as I don’t have to buy it. I want to try it out, sure, but I don’t want to buy it. The current GameCube has such bad software support why would I get the next version of the little engine that couldn’t?

Anyway, what do you think? Is Nintendo in the race? Or just falling behind more and more with each generation? Reply here or in our new forums.