How To Make Devil May Cry 4 Perfect 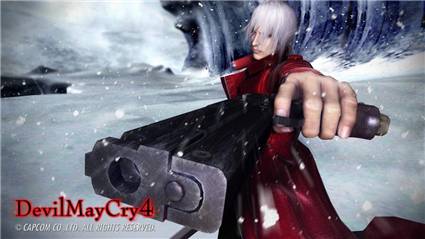 Now I’m a HUGE Devil May Cry fan but there’s one person I know that actually loves the series more than me & I thought I’d let him tell the world how DMC4 can be made into gaming perfection. Over to you Extra Terrestrial….

The possibilities, the dreams, the experience, the magic; endless.

OK, I want Dante to be able to jump in the air and GRAB a demon to deflect any damage take from the other demons to use a gun on the other hand to shoot in the other direction or whichever movable position it can go for the demon you are holding to (eventually) die because its own people have been hitting it – to make it balanced, have a certain limit of how many times you can use this system.

He must have different styles, just like DMC3 presented but in an absolute reality, I wish Capcom can enable players to switch styles real-time as this will make the game an emotional issue to deal with because the wishes of all fans will come true.

I mean, imagine the scenario; a demon who is powerful but is ultimately slow, you can use the trickster method to get around it and break his positional attributes down and then use sword-master = rising dragon as the time and slowness of the demon cannot be underestimated; dead.

The system is so deep and can be even deeper for the fans to break the general ‘rules’ of the game such as cancelling and being able to Devil Trigger repeatedly because of the system to recharge each trigger when doing SSS-Stylist damage – it is all too easy for me now unfortunately.

The original game has some classic level design and perhaps the best boss battles in the series. The reason why is because the bosses represented themselves with a story and are one individual in the game to take down with each boss having their own abilities that separate each encounter to make the game rather refreshing to play and re-play.

The Phantom (spider) – I spent at least 20 hours on that mission alone to just fight the beast and try and ‘perfect’ the fight by killing him in the quickest time, in the most stylist manner and present the work as a piece of art for the end to be respectful, not a mess. The amount of S ranks I got on that mission alone, that is something I will treasure.

You had a flying boss, human-form boss, demon-form boss, the shadows, nightmare, the devil (father) himself and the most memorable yet common enemies; the puppets. I want these kind of variety in the bosses to keep the game going and make you use different styles as DMC3 was too easy to run through the game without even attempting to test another (out of four) styles.

It would be nice to end the game with an ‘Ultimate Showdown’ by having Nelo Angelo, Vergil, Mundus and even perhaps see a return of Trish and Lady in the game! All the old buddies in a reunion. Perhaps have their own separate parts in particular missions in the game or lead it all up to one big event towards the finale!

Dante needs to have that personality he had in the original. It was nice to see his cocky-self in DMC3 but if the series wants to ‘grow-up’ and pit Dante for his hardest adventure yet then – OK, a few humorous moments to break up the pace would be fine but nothing too strong as the game may drift off a bit.

The amount of moves I have dreamt up is incredible. I would like Dante to use the actual environments or the demons themselves to START an attack whether it is by jumping off them or throwing the sword into them (imagine if they were all lined-up?!) to do a dash (trickster) and use the gauntlets to jump in the air to behold the power of holding down the triangle command *heavenly chorus plays in the background* for a blinding light to guide the way and the Devil Trigger upon its limits and… Release.

My Final Heaven – the move that will make any other move in any other game look absolutely pathetic.

I also would like to be able to slide under the demons legs and rip the ground out to blast them UPWARDS to stand up and using the usual sword = slice upwards and create a tornado of demons above Dante’s head and by releasing the command of shooting them for them to fall upon the earth that allows me and Dante to reach for the sky and just cause an impact from the clouds to the ground and even using the option of Devil Trigger can cause a shock-wave to pass upon the surroundings.

It is an insane amount of effort to require these particular dreams but to make them be realised would make me – and I am being so, so honest here – play DMC4 without the possible need of any other game (apart from Ridge) to exist in my life. Last year alone, I spent over 200+ hours on DMC3 so it’s bound to happen again so I urge Capcom to realise these opportunities and make them happen.

I want to bring the film Gladiator into this topic because of an extremely memorable quote and the image that is represented behind it:

SCENE CHANGE as Juba is digging in the sand for burial, at the place where Maximus died. He unfolds the small leather pouch and removes the figurines belonging to Maximus of his wife and son and gently places them in their resting place,

JUBA: Now we are free. I will see you again. But not yet, not yet….

I am free. I will see Dante again. But not yet, not yet….