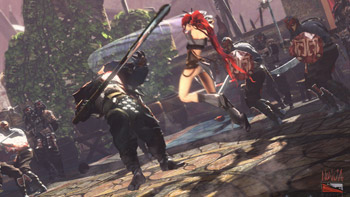 I’ve noticed in the July issue of OPS2M some new info about the type of combat techniques that Nariko will have at her disposal. She has three fighting styles: power, ranged & normal, & you can switch between the three anytime during battle by holding down L2 or R1. This means you can switch styles midway through a combo offering you a varied way to destroy your enemies.

The combat is said to be similar to God of War, especially the ranged style which allows you to use Nariko’s chain blades to destroy scenery aswell as slicing anybody stupid enough to get in her way.

You will also be able to throw objects such as spears, razor-brimmed hats, barrels & the corpses you accumulate during battle & control them in mid-air to make sure they land where you want them to.

The game will also incorporate some quick time events, where you press a button to match an on-screen symbol, such as what you may have experienced in games like Resi 4 & God of War.