Do PS3 Owners Need an HDTV?

I’ve had my HDTV for two years now (see the picture of my set below), and I’m really enjoying it. Every time a program comes on TV that’s not in HD, I’m disappointed. Last season my cable company didn’t have a channel that carried Smallville in HD, and I was miffed. Watching the Olympics, my wife once complained that the event she wanted to watch was on a “regular” channel. The HD experience is one you need to experience, not one that people can tell you about. And in my view, you really need a larger set to get the full impact. None of this 34″ widescreen HDTV stuff! Sure you get the benefit of a widescreen display, but at 34″ and most viewing distances, an EDTV (Enhanced Definition TV, between SD and HD) would be just as good. 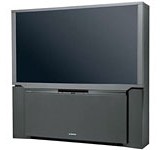 So if you were to ask me if a future PS3 owner should own an HDTV to use it with, of course my answer would be “yes”. Am I biased? You bet. But it’s from experience. My friend Todd has an Xbox 360 and it’s fun to play games on his 32″ SDTV. But he brought the 360 over to my place once, and it was like a white chocolate Easter bunny versus the white chocolate chunks from Laura Secord. (Hmmm, I guess that analogy only makes sense if you’re a white chocolate lover like me, and you know how great the chocolate is at Laura Secord stores. Ah well. Insert your own analogy expounding a big difference, if you like.) We play GRAW in four player mode, and it’s hard to see what you’re shooting at on a 32″ TV. We each get one quarter of the screen, of course, which makes it rough on a small SDTV. The HDTV makes all the difference. Not only is the image much bigger, it’s also more detailed. An SDTV gives you “Is that Todd in the distance there? Do I need to shoot? Yeah, I guess. Okay, line up on those two pixels there and pull the trigger. Nope – missed. Move over another pixel.” While with an HDTV it’s more like “Ha! Got Todd! Now where’s Steve? Ah! Right behind me!”

But I guess if I had to get all technical on you and answer the question in this article’s title, that is “Do PS3 owners need an HDTV?”, the answer is “no”. You do not need an HDTV to use and enjoy a PS3. You will covet one. You’ll think “How did I ever manage with a cruddy old SDTV?”. You’ll sell your left lung for one because they’re so cool and nice to play games on. But technically, if you’re gonna get right down to it, you don’t really need one. Just don’t tell anyone I said that, okay?

Pre-order a PS3 and Get One Game Free

My Internet Down September 25, 2006 | Blackstaffer