Lots on Assassin’s Creed for PS3

QJ.NET has a honking huge article that summarizes everything they know about Assassin’s Creed. It’s quite an extensive article. Well, as extensive as can be when you’re talking about a pre-release game. Frankly, I didn’t know that so much information was available.

What really intrigues me about this game is how you will interact with the crowds. The NPC’s in this game each have their own desires and don’t just walk a predefined path. As such, how you interact with them will play a large part in the game. It’s weird to see the contrast between this style of game and a game like GRAW, for example, which is supposed to be set in Mexico. But when you are hunting down bad guys in a city, there are no people about whatsoever, except the ones you have to kill. The Mexican populace moved out for the duration of the hostilities, I guess. 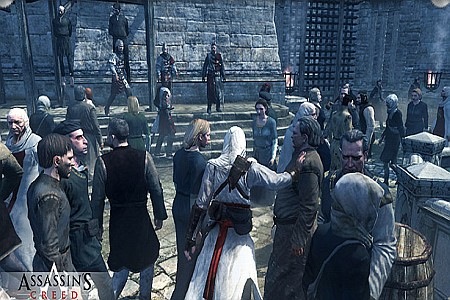 Ubisoft is doing a remarkable job doing the pre-marketing for this game. Everybody is talking about it. People wonder about the obviously interesting gameplay. What about the from-the-future angle? That co-op rumour sounds interesting. And what about Xbox 360 support? Is this a PS3 exclusive or not? (Right now the wind seems to be moving in the direction of “PS3 exclusive for a couple months, then available for other platforms.)

Gotta hand it to those Ubisoft guys. They’re making what looks to be a very interesting game and they really have everyone talking about it.

QJ.NET – Everything We Know About Assassin’s Creed