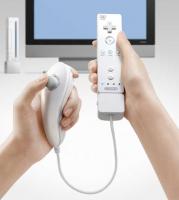 IGN has a great article unearthing the secrets of the Wii controller. A couple interesting things to note. The batteries are two AA batteries that will last between 30 and 60 hours, depending on what features of the remote you use. Upon booting up, some LED’s will show how full the batteries are, which is cool.

Nintendo uses a sensor bar to detect remote movement, and you place this bar on top or below your television. It is about 20cm in length and has sensors in each end.

The controller uses Bluetooth technology to communicate with the console, like the PS3 does. It operates on a 2.4GHz band. All the buttons on the controller are digital. I don’t think that refers to the trigger button under the remote.

Lastly, there a little bit of memory on the controller, but nobody seems to know what it’s for. Strange, huh?

More Interest in PS3 than Wii in Japan?