Gamasutra has an interview from ‘Video Game Journal’ with Ted Price of Insomniac Games, makers of the PS3 launch title Resistance: Fall of Man. It’s a long interview, well worth the read, though there’s not anything really earth-shattering in there.

It looks like Insomniac has a great emphasis on innovation, including lots of interesting weapon types. Price explainis. “We can do things like having Auger projectiles that tunnel through objects. We can have Bullseye bullets that not only bend around corners to track enemies but can be collected in â€œtrapsâ€ that can be detonated when enemies approach. We have a rocket launcher where you can stop the rocket in mid-air and have it hover above cover positions â€“ essentially converting the projectile into an artillery shell.” I have Ratchet & Clank: Up Your Arsenal for the PS2, and it too contains a wide variety of weapon types. I’m looking forward to checking out the ones in Resitance. 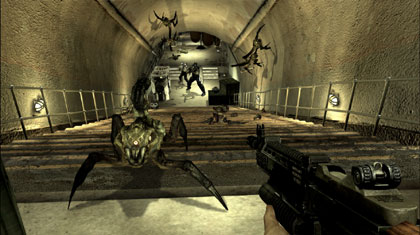 Price also talks about online, noting that you’ll be able to go online on day one and play with up to 40 people on a map. Even though I’m not the best at FPS’s, I do enjoy them, so I might give that a whirl, because online is free! What interests me, of course, are the modes other than deathmatch. My friends and I have fun playing King of the Hill in Halo 2. And playing Call of Duty 2 on the PC my coworkers and I really enjoy Search and Destroy. I wonder what kind of interesting modes Insomniac will have for Resistance.

The last interesting thing I’ll comment on is their engine. Insomniac is creating their own proprietary engine for Resistance that they hope to use and build upon in subsequent PS3 games. Price believes that in order to get the most out of the PS3, you’ll need an engine tailored to the PS3’s hardware, and not a cross-platform doit-it-all kind of engine. I’m doubtfull – we’ll have to see. There’s nothing stopping engine developers from tailoring their engine for each supported platform on the bottom end, while at the same time providing the same gaming API on the top end. On the other hand, developers might need more of a connection to hardware than that. As they say, the proof is in the pudding, and we’ll see how well Resistance stacks up on the PS3 once released.