Yesterday I wrote about some new images from Fatal Inertia which managed to leave me unimpressed about the quality of the ships.

Well today I feel a little happier about the prospect of playing Fatal Inertia, as Gamespot has some nice info about the weapons which you will be able to use to annihilate anyone that foolishly tries to overtake you! 😈 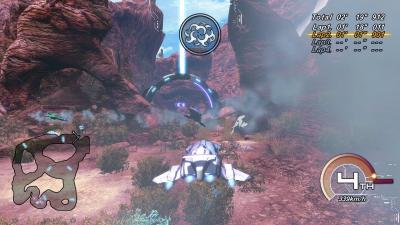 Here’s a brief rundown of the weaponry at your disposal:

Pros: A potentially devastating weapon. Can be dropped onto surfaces awaiting precise detonation when an approaching ship enters it’s range.

Cons: The CB can only move in a straight line so a good aim is a must. Limited use due to lack of auto or manual targeting.

Pros: Can be used to attach to enemy craft causing a huge burst of speed resulting in the effected ship smashing into walls or off cliffs! 😀 The rockets can also be used to give yourself a huge surge of speed, by dropping the rocket onto the tail of your ship.

Cons: Enemy ships could use the speed burst of the rockets to their advantage by zooming off into a massive lead, if they manage to control their ship.

Pros: Protects your craft from enemy weapons & lessens the effects that you may have from crashing into walls. Erm…gives your ship a nice glow.

Cons: The FS deactivates the weapons on board your ship leaving you well protected but unable to damage your enemies until the shield wears off.

Pros: Cause enemy craft to crash into walls or other obstacles by blinding them with thick smoke.

Cons: You could blind yourself if the smoke doesn’t clear by the time you come back round to that part of the course…

Pros: Causes enemy craft to drop to the floor like a drunk sailor after 24hrs of hard drinking. Also renders all weapons, within range, useless.

Pros: Release a powerful energy wave behind your ship giving you a brief burst of speed, reducing the speed of any crafts caught tailgating, re-directing any weapons aimed at you & removing any enemy weapons that have been attached to your ship, such as the MBR.

Pros: Obligatory “Bullet Time” weapon which slows time for everybody except you, meaning you could zoom ahead of any ships on the final straight towards the finish line meaning you win the race at the death. And they can’t do a thing about it! 😈

Could also be used to avoid locked on weapons or falling debris such as huge boulders.

Cons: A very rare weapon so intelligent & strategic use recommended.