Multiplayer fans (Henning) should be pleased with the multiplayer options that are available in UL: DK. If you have two PS3 pads then you & a friend can kick ass sharing the same screen, rather than a split screen, which is nice but could mean a your movements are restricted by invisible barriers. However, if you want some online multiplayer action with three of your PS3 owning friends, each character will have their own screen, meaning freedom of movement & no invisible barriers. 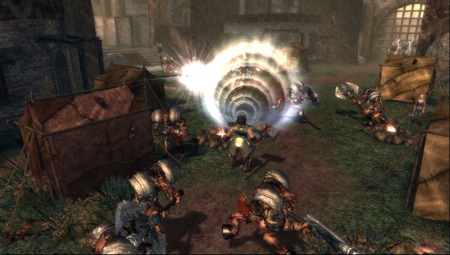 The game’s length seems to fall in between short & medium, with an expected completion time of between 12 & 18hrs depending on how good you are at the game & whether you play it alone or with friends.

There are no potions to heal yourself with as red orbs will do that for you after you’ve defeated enemies. Blue orbs will fill your magic gauge & Gold will boost your bank balance, although there’s no mention of what you can spend your gold on. Probably weapons, armour, magic spells & items etc.

You can also save your progress at any point in the game although you can only re-spawn at certain locations in each stage. Hopefully there will be a sensible amount of checkpoints in the game.

The game will also feature downloadable content with a free multiplayer death match mode already promised by Sony Online Entertainment. Game Informer also says that you could be able to pay for a fourth character class, aswell as extra stages, maps & stories, all for a price of course.

It hasn’t taken them long to fleece gamers for more cash! I for one won’t be paying for extra content if I get this game unless it adds massively to the games lifespan & replayability.

There are four videos for you to download from GI although they may take a while depending on your connection speed.

Resistance will Get a lot of Backing