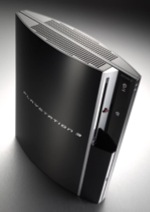 A whole bunch of new pictures of the PS3 has recently been released by Sony. Follow the first link below to see them. For a couple impromptu pictures, check out the second link.

These pictures really show off how nice the 60GB version looks compared to the 20GB version. This console is looking really nice!

Does anyone know how to get photos like this from Sony? I can’t find them on Sony’s site anywhere.

Gamefront PS3 Pictures
Hmm. That link doesn’t seem to work anymore. How about this one.
Playstation 3 works but Sony doesnâ€™t want to show it

I’ve added lots of the pictures to the PS3Blog.net PS3 Image Gallery.