Fall of Liberty Heading for PS3

I’ll give you one guess what type of game it is. A romance em up you say? Nope it’s yet another FPS!!! 😡

I’m really starting to get ticked off about the number of FPS currently in development for the PS3. Are developers playing it safe as FPS may be the best way to make games look good on next-gen systems? Anyway enough of my moaning, time to spill some info about this game.

Fall of Liberty uses the old “What if the Nazi’s had won WWII?” as it’s main story with the game taking place with the Nazi invasion of America.

The reason why this alternate history has occurred is down to one careless Taxi driver (no not Travis Bickle):

Fall of Liberty changes reality by twisting one historical fact: In 1931, Winston Churchill was hit by a taxi on 5th Avenue in New York. In reality, he survived the accident but walked with a cane for the rest of his life. But what might have followed if Winston Churchill had been killed in the accident? Without his voice to lead a country to war, the events of WWII change dramatically; the Normandy invasion never happens and the UK and all of Europe come under Nazi rule by 1945.

Following the Nazi’s victory over Europe, they eventually lead a “surprise” invasion on American soil starting with New York. The rest of America is soon plunged into chaos with the Swastika flying from atop The White House. 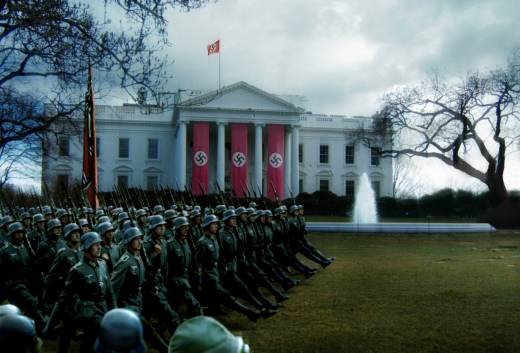 There’s no info about gameplay or anything else but it’s scheduled for a Q4 2007 release.

Fall of Liberty Confirmed for PS3