The Ridge Racer series has traditionally been one of the mainstays of the PlayStation platform; always there for the big launches with a couple of other releases down the line. The PlayStation 2 incarnations (Ridge Racer 5 and- the Ridge Racer that wasn’t -R:Racing Evolution) failed to live up to the high standards set by the preivous titles, but the more recent PSP and xbox360 games showed a return to the roots of what originally made the game popular- high speed arcade racing. 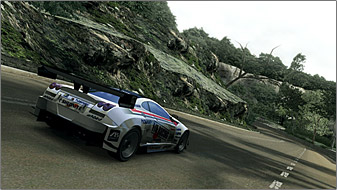 This return to form should be completed with Ridge Racer 7, which is likely to be available at the PS3’s launch. Whilst we will have to wait until TGS (23 days to go!) until we can find out some playable details, Namco has released some information now, albeit in Japanese. Here’s what can be deciphered in terms of game modes:

Ridge State Grand Prix-
The main mode of RR7. 22 circuits (all available in reverse form as well) in a series of 160 races. Interestingly the player develops their own machine using credit from race victories

Online Battle
Players can compete against 13 other racers over the PlayStation3’s online network. There is also an option for Co-Op play in team battles, relays and pair time attacks.

Global Time Attack
Another network option whereby you, and a friend if you wish, can compete against the best times issued across Ridge Racer 7’s network.

Arcade
The traditional “select a car, a track and then play” mode of Ridge Racer, it also incorporates a split screen multiplayer.

UFRA Special Event
These are special race events where you need to download data from the network.

Ranking Browser
View your various Ridge Racer rankings as they stand on the network.

Whilst it might not look any better than Ridge Racer 6 on the xbox360, the game modes listed above, the customistaion and online features have me really attracted me to this title! It sounds like a great addition to the series.

Fall of Liberty Heading for PS3

PS3 Slogan: “This is Living”

Playstation Plus Subscribers – The Rest Of Your August Content Is Almost H... August 13, 2012 | EdEN