No, not another story about Afrika! 😉 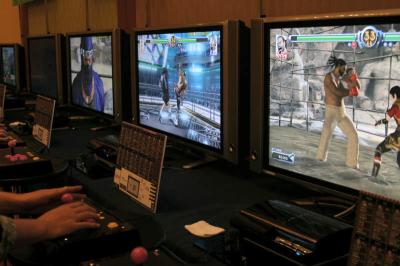 During a conference in Tokyo today Sega unveiled a fully playable version of Virtua Fighter 5 PS3, but unlike most previous PS3 demonstrations this one involved final, or near final at least, hardware. As the picture above shows, press were given access to the game and allowed to play through means of a USB connected arcade stick. The USB lead going into the PS3, with its power and disc lights glowing away. There’s not really much comment about the hardware though, so I guess we’ll hear more at a later date.

As for Virtua Fighter 5 it sounds as though its conversion from arcade to PS3 has been pretty much seamless, with one exception- the loading times. Even then though the loading (again suggesting this wasn’t simply coming via a dev kit) only weighed up to 10 seconds or so and you would imagine there’s optomisation to be done there. Currently the game seems scheduled for a January or February release (hello Euro launch title :wink:). Expect more playable impressions to surface at TGS.

Warner Bros. Interactive Entertainment will buy you a drink if you play Lord of ... May 24, 2011 | PAUL FIERCE