To be honest after the release of Tony Hawk’s Underground 2 I was pretty disillusioned with a franchise that had kept me coming back for more for five years. I still remember that day in late 1999 when I first played the PSone demo of Tony Hawk’s Skateboarding (as it was called in Europe). This game had litterally come out of nowhere and taken something that was a very cool and tricky outdoor sport and made it into a very fun and challenging video game. It made me become a skater (OK, so that was only for a brief period of time and I was too clumsy to be good). I bought every Tony Hawk’s title on release until American Wasteland last November- the unthinkable had happened- I’d fallen out of love with the series.

Which is why I’m delighted to see that Tony Hawk’s Project 8 is a further attempt to bring the game back towards its roots through a bit of re-invention for the next-gen. 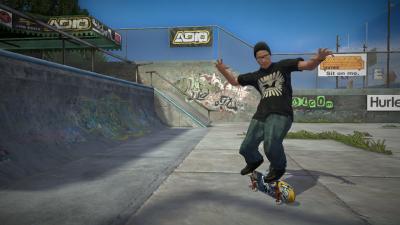 Instead of going for a simple graphical tune-up Neversoft have approached this title with the aim of giving players next-gen gameplay as well. The story follows you as a skater and your attempts become a fully fledged pro in the “Project 8” competition and you can expect a few mini games and side missions in what appears to be a pretty open-ended career mode (think Grand Theft Auto: San Andreas).
There’s also the option for the classic two minute runs found in the first THPS titles.

The real change is in the control system which is now designed around the analog sticks and not the d-pad. To start a “Nail the Trick” move in Project 8 you must use the analog sticks, at this point the camera zooms to your feet and you enter slow motion. Your character then responds to what you do with the analog sticks whilst your skateboard rotates below, timing is crucial to get the tricks right. Graphically animations have been vastly improved, something that becomes overtly apparant in “Nail a trick” with limbs and boards flexing as they should in real-life.

The only black cloud looming on the horizon is that IGN reports the PS3 version of Project 8 will not be online as Neversoft hadn’t received their Beta development kits until 3 weeks ago, this is a great shame as the 360’s online mode sounds incredibly detailed :cry:. Instead though PS3 owners are to expect extra bonuses that 360 owners will not see, so it isn not all bad. It is also worth noting that whilst these development kits only turned up recently both the 360 and PS3 versions of the game look identical. The game is due to ship in November for the US launch, but I really hope they postpone it to get the network features in, or offer a downloadable patch!

More on Resistance: Fall of Man, for the PS3