Assassin’s Creed wasn’t present at TGS ’06 but to make up for it there is 1 new screenshot (yes 1) and 3 concept art that Ubi Soft has released today. 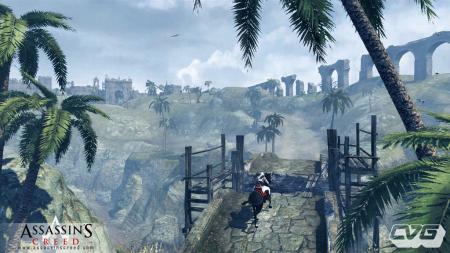 The concept art looks nice but it would be easy to be fooled in thinking they were in-game as there’s something just not quite right about them, according to Tom. 😉

Apparently Altair is a disgraced assassin who is trying to restore his reputation after failing to knock off Robert de Sable, the Templar Leader, and retrieve the legendary Templar Treasure.

After his miserable failure, Altair is demoted to the lowest rank of the Assassin Order, Uninitiated. Possibly the equivalent of being given a hat with a big letter D on it & being told to stand in the corner.

The Leader of the Assassins, Sinan, offers Altair redemption by venturing to the Holy Land and assassinating those said to be using the unrest caused by the Third Crusade to their advantage. Hopefully if Altair is successful, peace will be brought to the land and Sinan will undoubtedly reap the greater benefits. Isn’t it always the way. 😡

New Poll: What did you think of TGS?