As you may have picked up from the quick notes on the right hand side of this page, the latest RadiOPM podcast has confirmed their “secret November edition cover game” to be a port of the highly rated xbox360 and PC title The Elder Scrolls IV: Oblivion. The xbox360 and PC versions are both extremely popular and highly rated within the gaming community- gamerankings gives the title an average score of 94% with a similarly high user rating of 9.3/10 (both the top scores for any 360 title currently available) so to simply dismiss this as minor news would be folly.

The first PS3 screenshot is below: 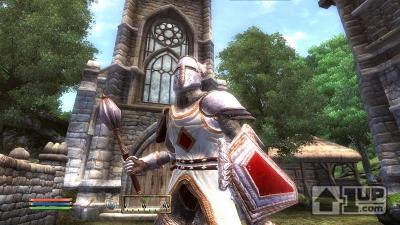 Whilst the screenshot may look pretty similar it has been rumoured this game has received a graphical tune-up from the original release 7 months ago. Even then though, if you are not a fan of graphical prowess and are looking for something more substantial you are in luck! The game is expected to feature an extra quest- supposedly 10-20 hours long and a new faction- “The Knights of the Nine”, who, for those who have played the game, are the opposite of The Dark Brotherhood; the reason for their inclusion is to offer balance to the game and give more incentives to play as good guy.

The game is due for release on launch day.

It has also been revealed that a variant of Oblivion, with a different setting but similar playability, is in development for the PSP.

1Up story and screenshots.