Despite being a Brit I do have a passing interest in basketball having seen the Knicks play the Sonics at Madison Square Garden back in January, but I have never actually played a basketball game. NBA 2K7 has already been released on the xbox 360 and recieved pretty good reviews, so my interest in this title is higher than you might expect.

Impressively Visual Concepts, the team behind the game are working on making the PS3 version even better than the 360 version where most developers would simply work to port the game. This makes sense as NBA 2K7 will not only be going up against NBA Live 07 from EA, but Sony’s own NBA 07 (recently announced as a 1080p game) all at launch. Visual Concepts have added in more animations and have worked harder on the motion capture since the 360 version went gold; they’ve also used one of the Cell SPUs to cope with the players uniform physics, this might seem a bit over the top, but it leaves the rest of the processor’s power to be allocated on other functions. The team has also added more detail off the court to the crowds, mascots and cheerleaders during timeouts. The PS3 version is also described as having a much richer look than the 360 version due to the way the rendering is completed, producing a more lifelike recreation of the NBA. 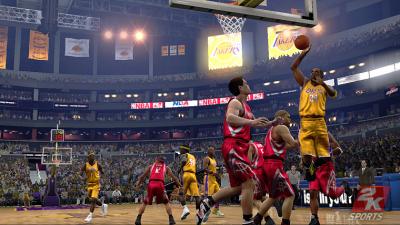 The upgrades are not just graphical though. NBA 2K7 PS3 will use the tilt controls in free throws, and if you want to you can take the shot just as you would a real basketball (hold the controller at head height and flick it forward). It’s good to see developers trying out idea like this with the controller and am interested to see what more comes from this approach. The game supports up to seven players on one console and when taking a free throw your opponent can shake their controller to put your shot timing off. If tweaked just right these features could be excellent additions. On the more negative side the game as yet does not feature an online mode, whilst Visual Concepts are confident they will be able to implement this by release they suggest the game could be delayed to become a launch window game. This is becoming the case with an alarming number of titles and is something I hope Sony sorts out very, very soon.

Poll: Has HDMI for PS3 Changed your Mind?