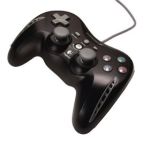 First off, Amazon is already selling a PS3 peripheral! The funny-looking PS3 Chillstream controller by Logitech is selling for $39.99. Ooops! Well, it’s on the Amazon site, but you have to pre-order it. It’ll actually be released on November 22nd.

You can now get on Gamestop’s mailing list so that when they start doing pre-orders (or decide not to), you’ll be notified. Everyone should do this!

IGN gives a few details about the web browser that the PS3 will have. Like the fact that you can have multiple pages open at the same time, which is kinda cool, but I’d rather have some tab-like interface (like the PSP) instead of showing all those pages on the same screen. Maybe that option is there. Who knows?

In case you haven’t seen enough interface demos, IGN has another one of those as well. If you’ve seen them before, you probably won’t learn anything new here. But, well, just in case I put it here to make this article longer!

Last, you may have heard that Microsoft announced 1080p support for the Xbox 360. But is it really all that? IGN points out that most HDTV’s sold today that accept a 1080p signal do it through an HDMI connection. The Xbox 360 has none. So you need to have a display that’ll accept 1080p through a VGA connection or component video. Which is rare. Which makes me wonder if any developers will bother adding 1080p support to their Xbox 360 games if almost nobody can view the results. It’s bad enough for the PlayStation 3 – 1080p sets with 1080p HDMI are rare themselves (but becoming increasingly less so). But the rarity of Xbox 360 1080p compatible displays is much worse. Ah well.