IGN were lucky enough to go to Activision’s press event on Thursday and managed to play Call of Duty 3 & try out the different modes. Below is a rundown of some of the more interesting bits of info from their preview:

The single player story involves you taking control of various British (in the West), Canadian (North), American (South) & Polish (North) troops at various points in the game as you try to win control over Chambois during WWII.

The various missions from each forces view point are all taking place at the same time but in different locations so you’ll be switching from force to force after each mission in order to complete your goal of surrounding and defeating the German Seventh Army and Fifth Panzer Army in a pincer movement.

Anyway this isn’t a history lesson so on to the gameplay.

At the event, Activision wanted to show off how visually stunning CoD3 is so there were a number of 45″+ HDTVs with the various machines plugged in along with surround sound headphones to make the experience more immersive.

Noticeably the PS3 room had 3 HDTVs that outputted at 1080p which according to IGN looked “simply awesome”. This is strange as Tom pointed out to me that CoD3 was a 720p game.

The tilt control of the SIXAXIS was also in use in basic form as players could initiate a melee attack by “snapping their right hand forward in a elbowing motion.” The tilt control will be much improved by the time the game is released with players being able to lean around corners or other cover by moving the pad right or left. This feature will also be in the Wii version of CoD3.

The main bulk of the action however, was seen in multi-player form and although IGN didn’t specifically mention if all the modes would be available on each console (who knows what’s going on with the PS3!), they were played on the Xbox 360 & they were very impressed with the online play in Call of Duty 3. 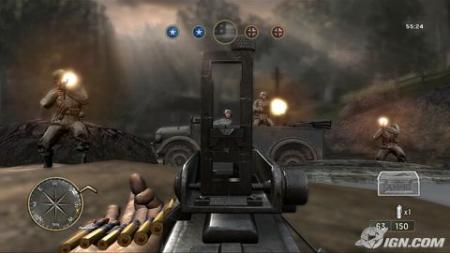 The online mode supports up to 24 players and two modes were available to try out.

Capture The Flag mode is exactly what it says on the tin and can be found in pretty much any FPS. The game is split into two teams with your goal to capture your enemies flag and return it to base to score points. Whoever grabs the flag is instantly made weaponless and has to charge home as if he’s late for his wife’s anniversary meal! Anybody trying to return the flag back to base only needs to touch it but he is instantly killed in the process so to combat this, the flag carrier can use the flagpole as a weapon which kills anyone it hits instantly.

The other mode available was War Mode and is new to CoD3. Once again you are divided into two teams and are placed at a random point on the map and must race to secure a specific location and raise their flag, at which point the other team lays siege and tries to overrun it, resulting in some hectic battles. 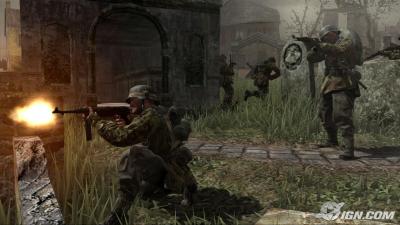 Vehicles now play a big part in both the single player and multi-player modes with players able to drive vehicles such as tanks, motorcycles, and jeeps armed with mounted machine guns, with one player driving the vehicle and another operating the various weaponry.

Players get into a vehicle by simply pressing the assigned button and can choose between any of the positions that are available that appears in their HUD. You can also take out any drivers and passengers in approaching vehicles leaving the passengers left to choose between scrambling to regain control or bailing out to receive the good news with a well aimed bullet.

Players can choose between seven different soldier classes: riflemen, light assault, heavy assault, support, anti-armor support, scout and medic, with each class having specific weaponry and a key ability that they can perform regardless of the mode of play.

Although the preview mainly focuses on multi-player fun, it’s got me intrigued as it sounds like a lot of fun. There also seems to be a good balancing act between the different modes and character classes giving nobody an outright advantage.

I think Henning will be pleased, although it sounds like the game is still a couple of months from completion and may not make the launch but it will probably be out not long after if that’s the case. Let’s hope Sony gets it’s online act together as the multi-player modes sound like great fun.

Check out the Night Drop Video from GameTrailers

The City Of Metronome by Team Tarsier January 9, 2006 | Blackstaffer