PS3 and Xfire… the full story

A couple of months ago I (and half the internet to be fair) jumped the gun with PS3 and Xfire proclaiming this to be how the PS3 would face up to Microsft’s Xbox Live. In the end it turned out Xfire is only going to be incorporated into one game- Untold Legends. 😳

Well now Sony and Xfire have gone public on exactly what the deal between them meant and given out some interesting details on how Xfire integrates into PS3 online. 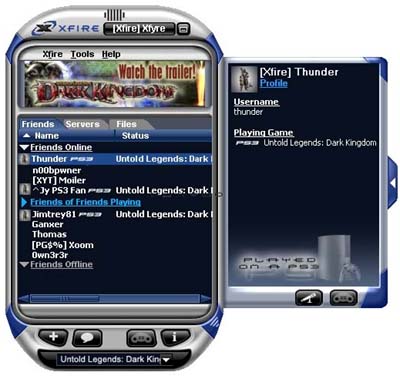 There are actually two deals that have been signed- one, with Sony Computer Entertainment, has made Xfire into a licenced piece of PS3 middleware that lets Xfire build a plug-in for any PS3 game. The second is a Xfire’s first deal with a publisher, in this case it is Sony Online Entertainment for Untold Legends, with many more to come.

The PlayStation Network Platform is not getting replaced by Xfire though- it is designed to compliment it and to reach out to PC gamers using Xfire. The system is a choice for publishers and some have jumped at the chance to promote their stuff to the PC market, but it is not compulsory. Xfire will show PC users when another Xfire user is playing, say, Untold Legends on their PS3, which, it is hoped, will drive sales of the title. More interestingly though- linking to the Xfire network also enables chat to other Xfire users.

In the case of Untold Legends Xfire is built-in- the first time you load up your game you are asked to enter your Xfire tag and from then one, everytime you load the game your Xfire buddies with PCs can see you playing it. From that point on you can also send and receive messages to and from other Xfirers.

Well it is interesting, (on the back of this I’ve registered my gamertag on Xfire and downloaded the software in anticpation of more PS3 games using the system), but there’s still a great deal of “wait and see” regarding Sony’s own online integration. This, if anything, makes things seem even more confusing in that respect! There’s clearly a definitive plan going but there is also a lot to be explained in the next 30 days!