Playing THP8 With The SIXAXIS 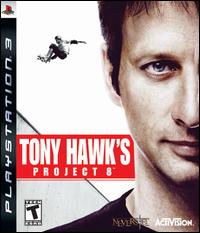 GameSpot has played Tony Hawk’s Project 8 using the tilt control in the SIXAXIS as the main control of choice and it seems to be a cool new way to play the game once you get used to it.

Firstly, you steer your skater by tilting the controller in the direction you want to go and you pull off grinds by titling it sideways and manuals by tilting it forward and back or back and forward in a quick movement.

You can also execute reverts by doing a twisting movement if you’re landing on a vert ramp and the same motion will pull off a pivot if you’re in the middle of doing a manual.

Sounds cool so far but it starts to get a little complicated when you try to pull of the same tricks that you would do by using either the D-pad or analogue sticks combined with the face buttons but use the tilt instead of the D-pad/analogue sticks.

The various techniques are mapped out exactly the same for all 3 different controls, so to do a kickflip you will tilt the controller to the left and press square.

Things do change for the new “nail the trick” mode when using tilt instead of the D-pad or analogue controls.

Using the analogue sticks which you activate by pressing both sticks inward, each stick controls your skater’s feet and you perform various tricks by moving the skater’s feet in various directions that you have moved the sticks.

If you opt to use the tilt however, you no longer control the skaters feet, instead you control more of the board and the directions you move the pad around will result in different tricks. You still need to press both sticks inward to activate “nail the trick” but you don’t need to keep hold of both analogue sticks.

If you don’t like how sensitive the tilt controls are you can adjust the sensitivity until you feel comfortable or even customise how much the tilt can be used for.

Overall it sounds like it could be a lot of fun using tilt to control your skater once you’ve practiced with it and it adds another dimension to how you want to play THP8 on the PS3.

When Sony announced that the PS3 pad would incorporate tilt control this is the type of stuff I hoped devs would have in mind for using it in their games and it looks as if it has a lot of potential to add new gameplay elements for us gamers if used properly.

I’ll definitley be trying it out when I buy it next year.

You can watch a video demonstration of the SIXAXIS being used to pull of tricks and control the skater by clicking the link below.

Watch various vids, motion capture sessions and listen to some of the music featured in THP8 at the official THP8 website