IGN has got what is probably the final preview of Resistance before launch. 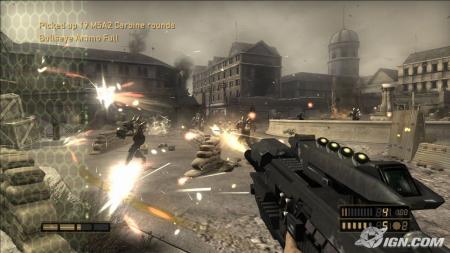 The first point worth highlighting is that the game is finished- IGN was given a two level demo to try out, but there are very few differences between this and the TGS build. Shadows have been turned on, enemy AI works better as a team, the number of cover points and allies has been beefed up… basically there is a lot going on at one time in the final version of the game. New information has come to light too, damage is limb specific- hit an alien in the knee and he’ll fall to his knees, shoot the hoses on a Chimera and they’ll splinter off. Your AI colleagues cannot do all the work though, its up to you to win the war, but they can injure your enemy. Health is similar to Halo, as in it will regenerate over time following damage, but it is divided into quarters.

Finally, the resolution of the game has been locked at 720p, whilst Insomniac tried to reach 1080p, but they discovered they did not have enough RAM left to make it manageable, Ted Price explains it more in a Q and A session. Ted also mentions that due to some improvements, the size of the game has fallen down to 16GB- PAL video has been removed and the compression improved.