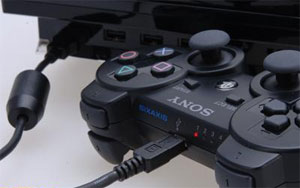 Since Sony announced that the PS3 pad will use rechargeable Lithium Polymer batteries that can’t be removed once they have died, some people have complained that they will have to buy a new pad once the battery is dead.

Although the North American price point has been announced as $49.99, the European price hasn’t, but I’m expecting the pads to retail at Â£29.99, so it’s not exactly going to be cheap to go out and buy a new pad everytime your current one fails.

A Sony spokesperson spoke to GI.biz and tried to calm some of the more concerned soon to be and future PS3 owners about the longevity of the batteries and offered the possibility of Sony doing some sort of exchange to replace pads that no longer work:

“This is a purely speculative story and is largely untrue. The latest generation of Lithium Polymer batteries hardly suffer any memory effect at all, so it’ll be many years before there’s any degradation in terms of battery performance. When and if this happens, then of course we will be providing a service to exchange these items.”

Just exactly what kind of service will Sony provide to replace the pads once they go & will it be free?

I’m not too concerned about the lifespan of the batteries as I’ll have a spare one anyway because I’m prone to smashing my pads during extreme moments of gaming rage! 😡

As long as I get a good couple of years use out of my pads before the battery dies I’ll happily pay for a new pad.