Here we go again. This time around it’s the International Development Group with their forecast about the next-gen console war. It’s easier to just show the chart, so here it is: 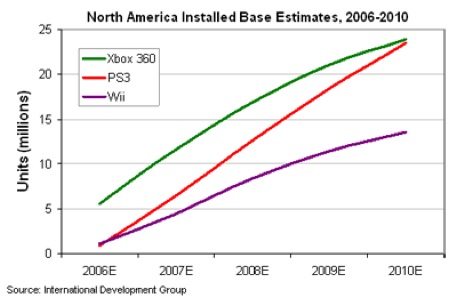 They predict that four years from now the PS3 and the Xbox 360 will be neck and neck, with each at about 24 million units sold (with the 360 being slightly ahead). The Wii will have about 14 million sold. Not to shortchange Nintendo or anything, but I find the Wii numbers hard to believe. Uh… what am I saying? These are projections, man! Ah well. They’re fun to look at, at any rate.

No ‘Achievements’ System for PS3