One of the less noticed things to appear with the cavalcade of media that came from Sony’s Gamer’s Day was Unreal Tournament 2007. The game looks like standard UT fair; running around in vast environments, with huge guns creating enormous explosions in an attempt to kill as many opponents as possible. The game makes use of Epic’s Unreal Engine 3 (unsurprisingly) and based on the video, linked below, it looks set to deliver the kind of graphics the released screens have pointed at in gameplay. Epic are working on tightening up Unreal Engine 3 for the PS3 right now, so hopefully the game will see more benefits from this work when it reaches a finished state! The video also highlights that vehicles and turrets will play a significant role in the game. 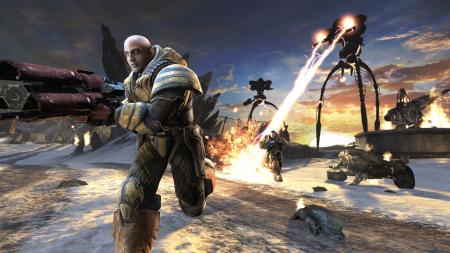 Unreal Tournament on PS2 was a let down; a poor conversion of a reasonable PC title, but the biggest thing missing was the online mode. It appears that Epic should have everything on their side though this time in bringing a full version of Unreal to the PS3. Lets hope they deliver! The game looks set for release in the first half of next year.