I’m almost certain that the next week will bring us the first online gaming site reviews of Resistance: Fall of Man and finally reveal whether it lives up to the hype.

In the meantime we will need to settle with Eurogamer’s final preview. 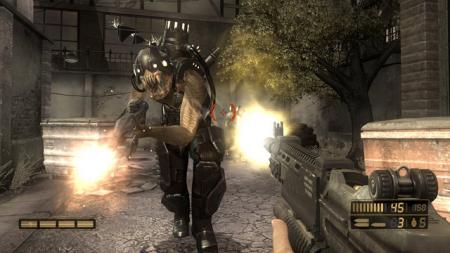 The first thing the preview goes out of its way to highlight is that the game is not simply a Second World War game with aliens. Resistance shares more in common with the likes of Ratchet and Clank than Half-Life 2. Like Ratchet and Clank it becomes apparent from an early stage that Resistance is all about the fun you can have with improbable weapons. A spectacular example is the BullsEye which has varied effects depending on whether you hit an enemy or the ground.

The preview also has particular praise for Insomniac’s approach to the title which seems to distance itself from traditional shooters like F.E.A.R. with a more lively approach. There seems to be more of an element of amusement and fun in the way things can be done in Resistance than you would find in many first person shooters.

To me the control scheme described does not sound perfect, happily though Insomniac has previously revealed that this will be a customisable feature of the game. Still this sounds like a day one purchase to me! Other previews have read suggest the game’s main missions are fairly short (clocking in at only 12 hours of length); but provided it is as good as Eurogamer’s preview suggests and the variety and fun can be kept in later levels and through the multiplayer then that problem will become pretty insignificant.

The preview ends with the tantalising hint that Eurogamer has actually played the final version of the game, has it ready for review and has in fact already come to a conclusion. Talk about leaving your audience on tenterhooks!