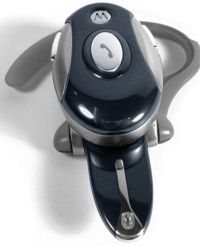 Last night after work I dropped by a couple stores and finally found a place that had several Motorola headsets. The numbering is a little off, but the three I found in increasing price and quality were:

So I picked up the H700, brought it home, and charged it up. From what I understand, any of the above headsets should work. But I made sure to ask the store about their return policy, just in case. No problems there. I had to go through the usual contortions to remove my new product from its packaging. (One of my biggest pet peaves in life!) The charger is just a wal-wart with a USB mini-plug cable attached, so when one of my PS3 controller’s battery runs down, I’ll try charging it with this. Should work.

I paired it to my cellphone just fine. Then I paired it to my Mac. Last I paired it to my PS3, which worked. The problem is that sometimes when I pick up my headset to use it and turn it on, it doesn’t work. I mean that the headset turns on – the blinking light thing happens, but my PS3 and the headset aren’t synced up. I’m a total BlueTooth newbie, so maybe I’m doing something wrong. Anybody out there know how this stuff works?

So what I did is re-pair it with the PS3 (which shouldn’t be necessary) to “wake up” the PS3 – H700 connection. I tried the headset in a R:FoM game and it worked, but there was just too much noise. People were coughing, some had their TV’s turned up too far, etc. It was just too much to be useful. I was playing a really crowded team deathmatch game, so I didn’t really need the headset, so I turned it off.

Later I tried a voice chat with xBerserker, and that worked fine. Soon the two of us will try a test game of R:FoM with the voice chat to see how that works. Anyone want in? We could set a place and time. Headset required.