TheeSpeech has a video wherein the developers of MotorStorm talk about the game. I think the guy at the end says it best. He wants to make a game that other people will remember and talk about. I think they’ve done that already, and the game isn’t even out yet! 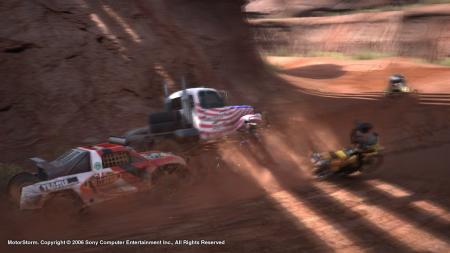 If you have a PS3 but haven’t downloaded the demo yet, then I suggest you make trying MotorStorm your number 1 gaming priority. You won’t be disappointed.

One thing though: I find using the tilt functionality to control the car to be much more difficult than using the controller, but more fun. Anyone else have thoughts on this?

BEHIND THE SCENES WITH MOTORSTORM AT EVOLUTION STUDIOS