I remember that Full Auto for the Xbox 360 wasn’t that well received. Middle-of-the pack review scores were typical. People complained about framerate issues. I remember thinking at the time that these reviews are unfortunate, because developers put a lot of work into a game, and a bad review is a terrible blow to the developer. On top of that, who want’s to play a mediocre game? 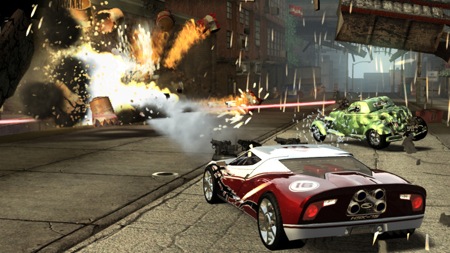 Pseudo Interactive learned from their mistakes and has improved on the original Xbox 360 version of Full Auto. The result is Full Auto 2: Battlelines for the PS3.

Pseudo developers removed almost all of the slowdown from the Xbox 360 version. The game runs pretty smooth, while is a must for a racing game. They’ve added an arena style combat mode, which IGN says is a lot of fun. In general, the whole game has been polished up, and while the original Full Auto got a 7.1 (Decent) from IGN, this PS3 version got a 7.8 (Good).

Mediocre splitscreen support is one of my pet peaves, and here Pseudo Interactive did decide to cut some corners. Splitscreen mode only supports two players, instead of four, which is disappointing. One-on-one crazy car action is a small taste of what 4-player mayhem would provide.