I played Call of Duty 3 last night and had to try entering several games before successfully connecting to one. And by “several” I mean seven. Seven games that I couldn’t connect to! 🙁 “Could not connect to other players.” Or something like that. Then I finally got into a game that somehow ended… somehow. In the middle. The server kicked me out. That’s really annoying. And I never have this problem playing Resistance. 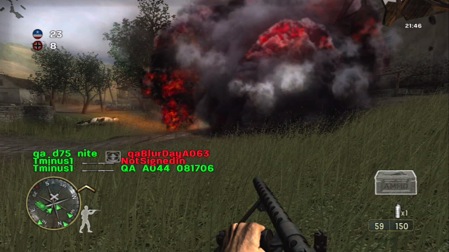 Anyway, I finally got into a game that didn’t abort on me. And I had a lot of fun. I shotgunned a bunch of players. The shotgun is my reason for becoming a medic. I like the shotgun. The level was a castle with a courtyard in the middle, and I tried to circle around behind the enemy team and blast them from there. Sometimes it worked. Ah, good times. Good times.

But I have a question for all you CoD3 players out there: how the heck do I revive someone? As the medic, I could if I wanted to. But I haven’t figured out how to do it. I tried standing near the medic-needing person. Kneeling. Hitting all the buttons. Nothing.

So if anyone out there knows how to revive someone, please tell me!!!

In the first game I played there was a medic who kept killing me and reviving me. He eventually got voted off. Or left, or whatever. Annoying. I wish I could remember his name so I could put him on my ban list.

[Edit: Does anybody else find the shotgun in CoD3 a little weak compared to CoD2? In CoD2, one shotgun blast at 8 feet will kill someone. Not so in CoD3. I had to hit people two or even three times before they died. Only rarely did one shot procure a kill. ]

[Edit: Activision sucks! I contacted their support about this, and they say that they do not give out “hints” to the game! Basic game usage is a hint? Give me a break! ]

[Edit: Another person told me it was the R2 button to revive someone, so that’s two people now who have said that. I’ll give that a try. I just hope I don’t end up grenading myself! 🙂 ]