Well that was an interesting evening! I finally got to get hands on with the PS3 and also got a run through of the system features.

Full details after the jump.

The evening started with some confusion as to where I was supposed to be going, but I quickly found the location which looked strangely out of key. 3Rooms can be found in a trendy part of London’s East End near Brick Lane (famous for its wealth of Indian restaurants). The actual location was on the site of the Truman Brewery, so it should have come as no surprise to me that the drinks were free! Inside the setting was extremely plush. If you have ever seen the Carlsberg adverts you will be kind of aware of what I saw.

Anyway on with the show! The first part of the evening gave us a chance to look at the PS3 XMB. This was my first chance to see this up close and personal and I found it impressive. The functionality didn’t appear at all restricted although there were some areas I felt needed to be tightened up, particularly the browser’s speed. Anyway, the following is stuff that struck me as not coming out in previous discussion.

You can view images directly from a camera connected via USB and then easily upload the images on to the HDD. A different photo mode was also demonstrated whereby the PS3 zooms to a focal point on the picture (the PS3 looks at the picture and works out where the centre of the action is). I was really impressed by this, an extremely nifty feature. It’s also worth pointing out pictures fail to do the photograph and film slideshow justice. It looks really good. At this point the rep also bought up the XMB (whilst the slideshow continued), went to the music option and started playing back Razorlight’s new single America. 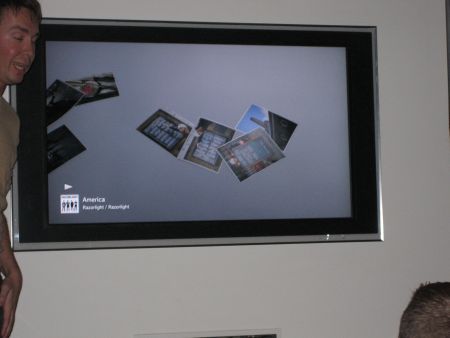 Firstly I must say I found SCEE’s selection of music on the PS3 excellent. Great indie stuff. Well, I like it anyway! 😉 They had hooked up an iPod to prove delving into the device was possible, but whilst the rep managed to quickly navigate the variety of folders presented there was clearly an opportunity for errors. Copying tracks from the iPod however seemed extremely quick and the album information was easy to find once on the PS3’s HDD. I also liked the details that the PS3 stores about tracks including “numbers of listens” and album art.

Again, I found this very impressive. The ability to playback videos downloaded from the itunes store (I assume this, as with music, excludes DRM protected files). The high definition movies, when paused, presented us with digital camera quality stills which could then be turned into thumbnail movies of the following 15 seconds of film. They also demonstrated Mission Impossible 3 on Blu-ray. Whilst the rep said that Black Hawk Down featured a better encoding system I was very impressed by the details in the scene we saw (the explosions looked spectacular). The picture above doesn’t do the film justice. If you thought HD video didn’t matter then you really need to see a demo. I don’t think I would replace my DVDs, but in the future I will likely shift to owning a few HD movies.

Not much here we have not seen before. The rep bought up a YouTube video on the web-browser, and whilst the playback was quite laggy this feature is nonetheless impressive. For those wondering the video was the Genji one from E3 2006; Sony clearly is none too concerned about these videos damaging its reputation further. The rep also explains that the producer featured no longer works with Sony.

This is a really cool feature. I was impressed that the PSP user was able to pick up from where files left off on PS3, with the rep finishing off watching Casino Royale by streaming to the video to the PSP. He was also able to browse files on the iPod which was still connected to the PS3 by USB and fiddle with the response time which offered the option to improve quality but slow the responsiveness. This feature is managed by wireless buffering. The rep again re-iterated Sony’s intentions to allow remote access to the PS3 from another location (although, when pressed the rep revealed it was unlikely that there would be a method to turn on the PS3 this way). A few issues did arise- it takes a long time to end remote play from the PS3 end and I am also concerned that the PSP’s battery life will hinder utilisation of this feature.

The friends list does provide information as to what people are playing at the time and it was again re-iterated that this ID is both unique and constant no matter what activity you are using your PS3 for.

I thought the PS3 store seemed quite easy to navigate. Again, think the PSP browser but with no text entry requirments and designed natively for the system. The rep explained that due to bandwidth issues, Sony was unlikely to offer PS2 sized downloads in the future, so for now they’re limiting to PSOne titles. When a BD-ROM, say Motorstorm, is in the system you can access the store and head to the relevant menus to get exclusive downloadable game content; a very useful and simplifying feature.