Right, so I’ve chatted you through what was said. Now I can talk you through my personal impressions of what I got hands on with!

Obviously my first point of call was with the Sixaxis. The controller is extremely light and at first it was quite disconcerting, yet after a while it began to feel “right”. The device felt solid and the wireless range was very good as one of the bloggers moved back to the point where he was struggling to see the TV. Despite the large amount of various wireless devices (15 or so PS3s with Bluetooth and wi-fi connections) in the area we had no problems getting the controller to sync and stay connected. Removing the USB cable caused a brief period of calibration to occur as the controller and PS3 synced, so it is always best to pause your game.

The analogue sticks appear to have been slightly reworked and can be best described as “more xbox like” with movements seeming easier to control. The new “triggers” are best thought of as “pedals”, they aren’t really like the 360 or Gamecube ones; but they seemed grippy enough to me and I had no problems holding the pad at after a while. The removal of rumble is noticeable, but not as big a problem as I thought it might have been. Whilst playing I didn’t really notice its absence until I thought about it. That said, I would still rather have it. The PS button in the centre of the pad can be held down for 5 seconds to bring up a number of options about restarting the console or syncing it.

The first title I got hands on with was Ridge Racer 6… errrr… Sorry, 7. Yep, that should make my opinions pretty clear. This title is pretty similar to RR6 on the 360, but with a slight graphical refinement and a few (very nice looking) tracks. It is by no means a bad game; it’s still a challenging title, but it only took me a few minutes to get into the swing of drifting around bends again. Boosting is the same as the PSP version, whilst the slipstreaming function is an interesting approach but too easy to build up. I enjoyed my time with it and would definitely put it down as a title I need to get some time, but it isn’t top of my priorities for launch games. 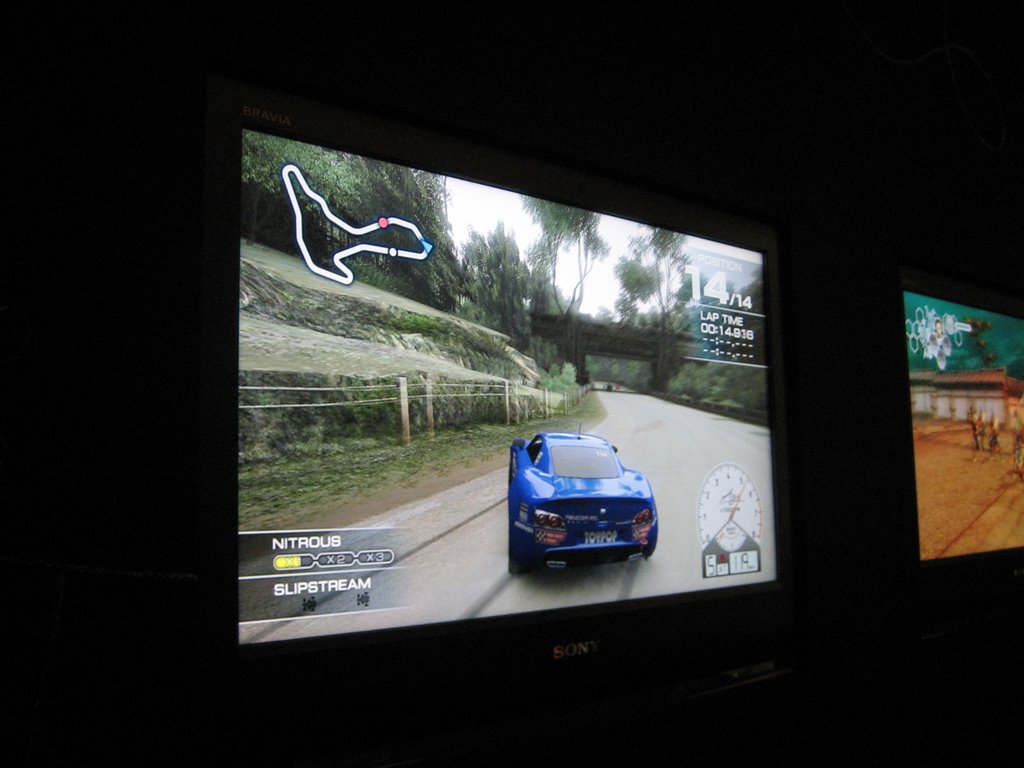 So then I went on to try out Genji Days of the Blade. Whilst I had not been too disappointed by RR7 Genji proved to be completely underwhelming. I struggled with the camera angle as my character ran across a bridge into a small town, well I didn’t actually make it to the town. I got stopped by a Matrix-esque wall of “code” forcing me to go back and kill the enemies. Whilst I’m sure there was more strategy available I just bashed the buttons getting my “brute” style character to swing his lumber around and defeat enemies. As if the gameplay wasn’t last generation enough, the graphics were also a disappointment. There was a bit too much bloom lighting which gave a hazy effect and the characters and environments were low on details. Overall I was unimpressed. 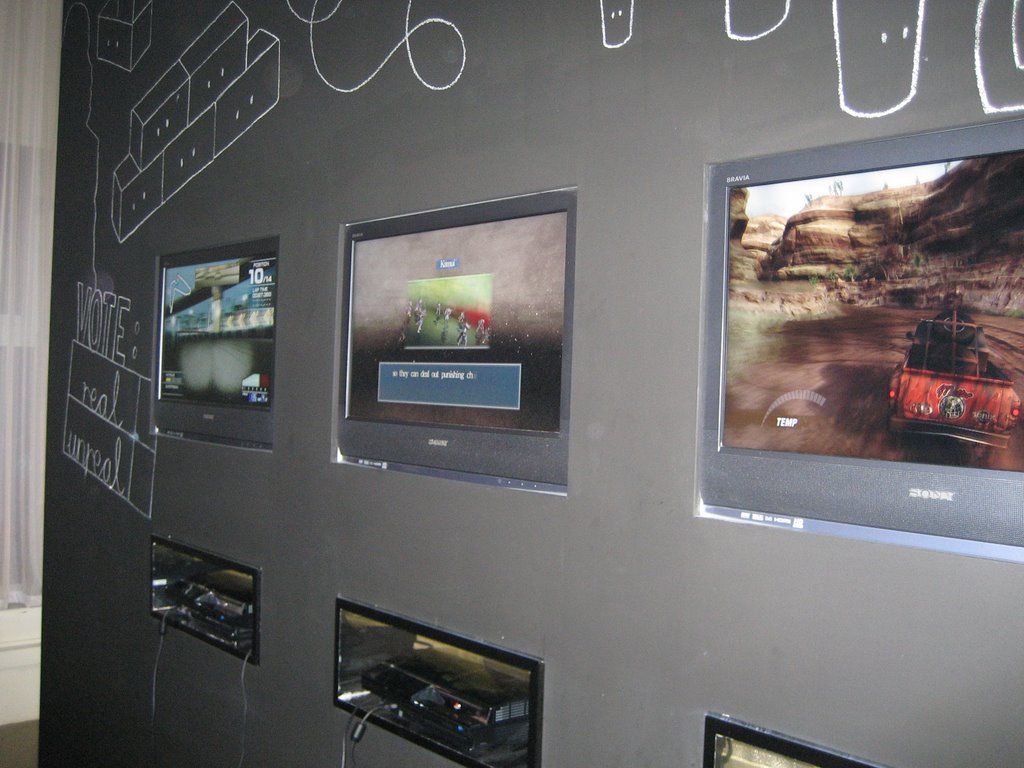 Ah… Then things picked up. Majorly. I got to play Motorstorm. Firstly I would like to get a complaint out of the way. What was going on with the motion sensing? The game was nigh on impossible for me to play with that mode on… I hope that this is something that gets rectified for the final game because this really did feel like a last minute addition. Of course I then selected the option to play without tilt and the experience improved dramatically. The game is fast and beautiful to look at. The details as the cars and bikes churned up the muddier sections were spectacular. The level of detail on the cars (and inside) added to the immersive experience. 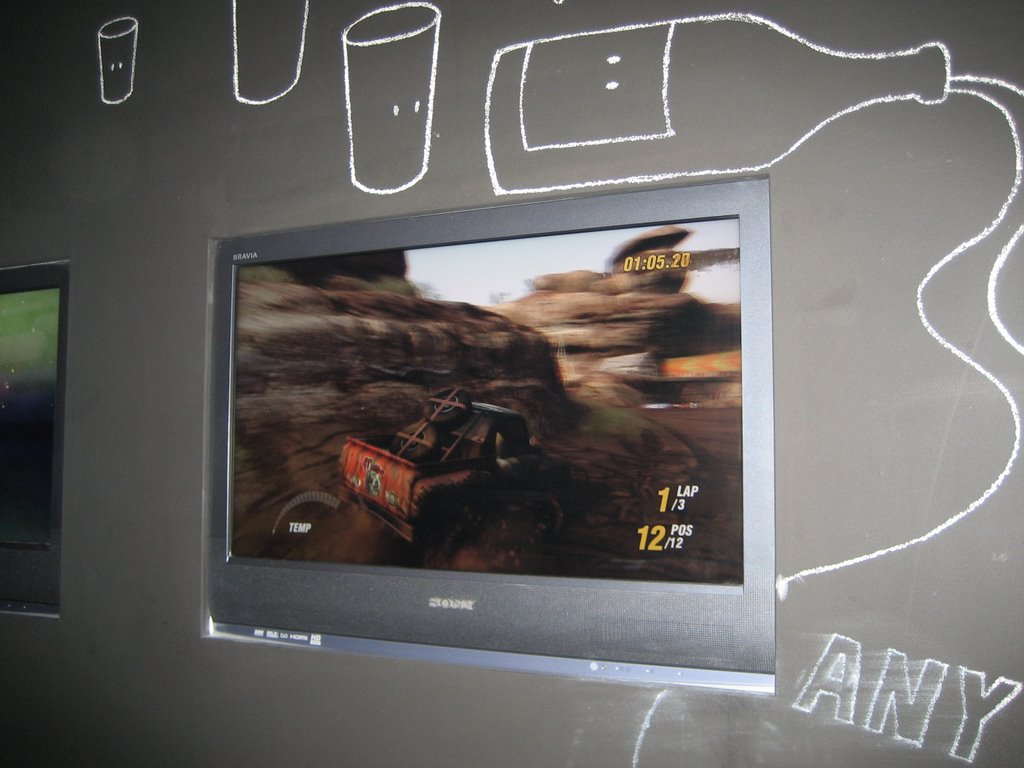 I was really impressed by Motorstorm and providing that the full game maintains this playability and that the online modes for Europe are as good as they clearly could be, this will be an immense title.

After Motorstorm I moved on to Resistance. Often touted as the PS3 biggest launch title I was highly anticipating the experience. What I got was an excellent launch title. There were some elements where the graphics and gameplay could have been tightened up, but Insomniac’s effort certainly was an attention grabber. The game benefited from the improved analogue sticks of the Sixaxis, but I think I’d need more time to debate the pros and cons of the shoulder button weapon fire and switch system. Whilst it will be outclassed in the future and is already in the shade of Epic’s excellent Gears of War, I certainly enjoyed my 10 minutes with the game.

Just before I left I also got to have a go at Formula 1 Championship Edition. The game is pretty similar to the PS2 Formula 1 titles to play, but it certainly has benefited from the extra horsepower in the PS3. The game looks like Project Gotham Racing 3 on the xbox360, but obviously has a lot more cars in it at the same time. I felt that there may have been an improvement with the opposition AI too. I get the feeling this title will be overlooked when it comes out, but I would advise everyone at least give it a go because there is a great detailed racer here.

After messing around with the games titles I moved on to fiddle with the PS3’s multimedia functionality.

Simply put, on its own the PS3 is a very good multimedia player. It looks the part and managed to do multiple things with no sign of difficulty. I particularly enjoyed how well remote play worked, but that said I do have my concerns as to how worthwhile this will be with the PSP’s limited (especially in wi-fi mode) battery-life. Picture quality for video playback wasn’t great at first, but could be improved by lengthening the buffer time. I have a feeling that this could become invaluable to a lot of people. Especially when it becomes possible to access your machine remotely. 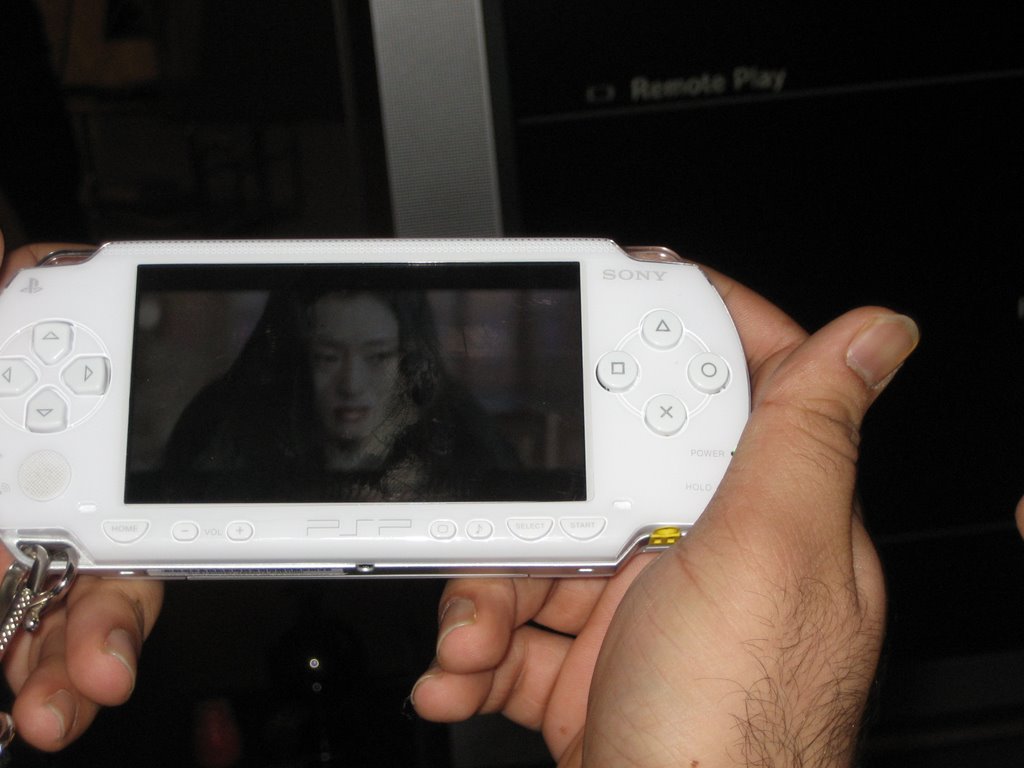 I also got to mess around with the web browser. I was pleased at the extent that this version had improved over the PSP one, benefiting from the larger resources available to the PS3. I scanned through various options to change how the pages were rendered and make them easier or harder to read. If anyone can use the PSP browser well they will have absolutely no problems with the PS3 one. I particularly enjoyed the fact I could quickly navigate to the BBC Sport website and see that Alan Curbishley was near certain to being the new manager of English football club West Ham United. I particularly liked the ability to “explode” the window to fill the 60 inch HDTV screen, although the BBC website did not demonstrate this too well. 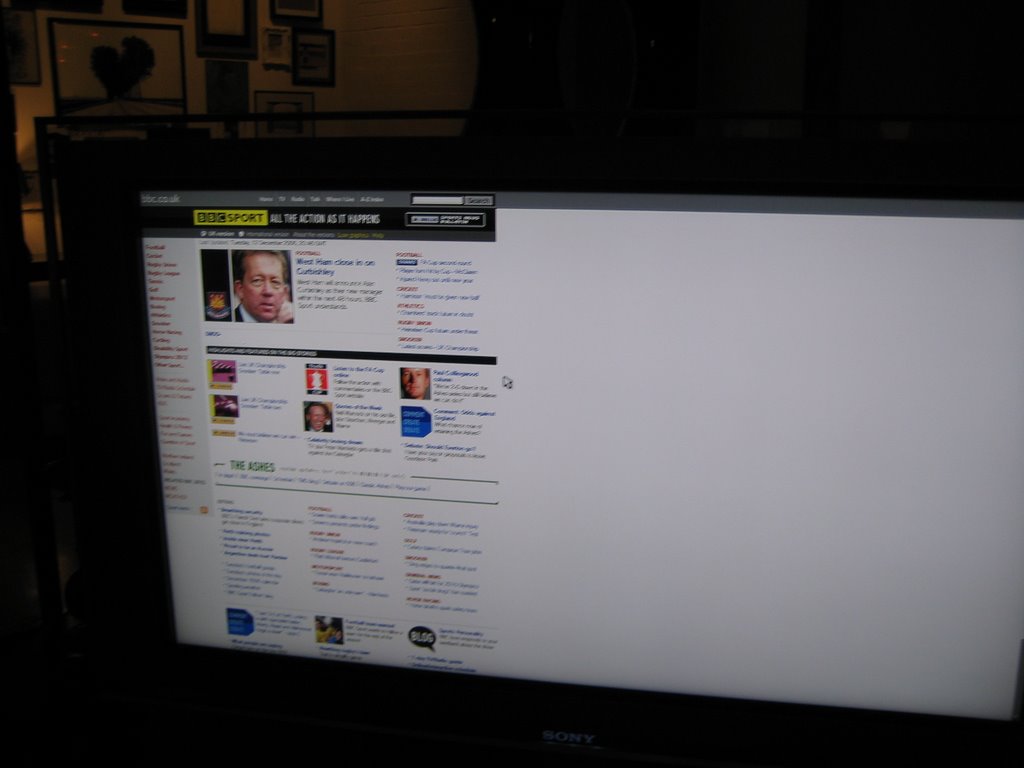 Conclusion
Well, based on the news from yesterday I think this event will have done Sony some favours. It won’t help to completely end their PR errors, but I hope that it is the first of many, because I want to see how things progress (rumours are a second event will take place in the new year). There are few barriers against people attending, so I advise that if threespeech advertises another event you should go. Even if just to see the PSPs in the toilet. 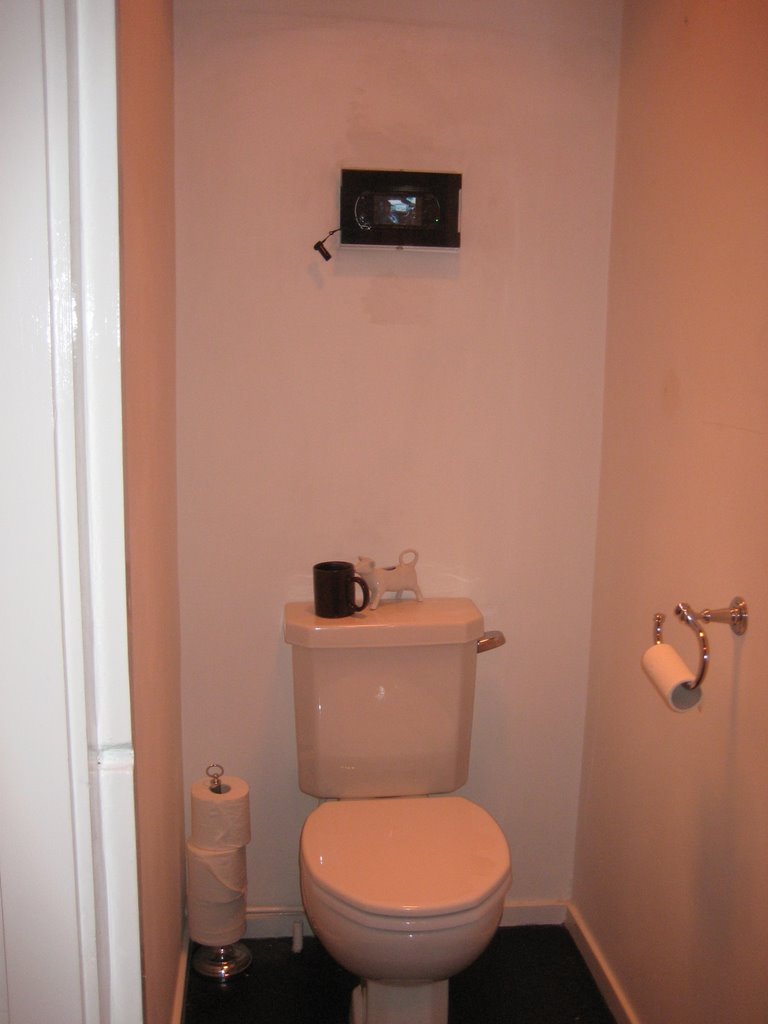 As for the machine, I found myself being more impressed by the multimedia functionality than the games. I didn’t really get to properly test out the functionality of the Sixaxis due to the nature of the games I was playing, so Lair’s absence was disappointing. It was destined to be playable at the event, but had to be removed after a bug was discovered late-on. This suggests we would have had the opportunity to test out a new build or level. Bah.

The games lived up to most of the impressions I have read about them; OK for launch titles, but insignificant in the great scheme of things. Motorstorm and F1 showed promise for the future as did downloadable title Calling all Cars (which I only got a brief “eyes-on” experience of. Fortunately the games were one of the biggest problems with the PS2 launch, so I’ve got few concerns about things improving.

I hope you’ve enjoyed reading this as much as I enjoyed the event. Thanks again to Sony and rampindustry/threespeech for organising the event. I hope this one of many I can go to!