Last night I played some more Call of Duty 3, and enjoyed the team play experience. But I wanted something different, so I decided to try a team game in Resistance: Fall of Man. One I hadn’t tried before. So I tried a game of Breach, not knowing much about it.

It turns out that the purpose of Breach is to destroy the other team’s reactor. There are other reactors on the map as well, which gives you other points to spawn at. They also give your home reactor additional defences, I think, though I saw no evidence of that. As a matter of fact, after playing two games of Breach, I wonder why anybody bothers with these secondary reactors at all. 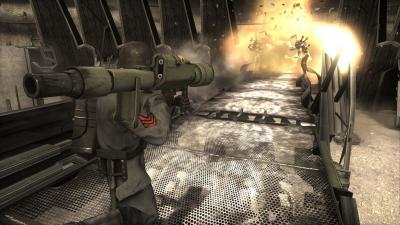 Anyway, like I said, I played two games of Breach. The second was just utter mayhem. It was played in Manchester, I think. The circular level with two sidebranches that hold the reactors. And it was nuts. The game was set up for unlimited amo. Both sides were roughly equal in numbers, but as soon as the game started the other team quickly captured all the other nodes and started in on our home base. I don’t know how they did that so fast. The rest of the game was just defending home base, with lots and lots and lots of grenades and rockets. It was pretty much a stalemate, so I did something I don’t like to do – quit the game. I don’t think I’ll play a game with unlimited amo again. While the craziness was a little fun, it just got tedious.

The first game I played was a lot better. I really should try to remember the names better, but it was played on that level with two little towns up on cliffs, with a valley filled with catwalks between the towns. I played a very good game actually, better than usual. In the last round, I had the highest number of kills, which is quite unusual for me. But don’t tell that to the guy who invited me to become part of a clan! After the round was done, I saw that I had an invite to join a clan, and I naturally accepted – why not? Now I just need to figure out what a clan does…