IGN has an extensive interview with the Factor 5 president about Lair and shows lots of game footage that hasn’t been shown before.

From my perspective, it’s hard to know what to expect from this game. I’m not sure whether it will be amazing or merely another good game with great graphics. I haven’t played previous Factor 5 games but they are clearly an experienced team and their games have gotten strong reviews and praise. 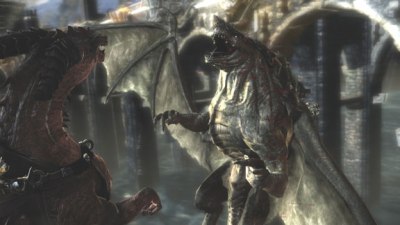 This game looks better and better. The graphics are amazing, but we’ve seen that before. He mentions that there is a lot of sandbox style gameplay which sounds great but I can’t see any of that in the gameplay footage that they show.

The president also seems to be the ultimate PS3 fanboy, praising everything from 1080p to blu-ray to Cell to the sixaxis to HDMI. That’s a great sign, as we can expect them to exploit the PS3 hardware to the fullest.

This is definitely one of the most anticipated PS3 games of 2007. I look forward to seeing more of this title.

Lair Interview and Footage on IGN

Wipeout to use Motorstorm Game Engine

PS3 Misses Out On TMNT Action