Last night I got a chance to play MotorStorm some more, and I’m more impressed than ever. I played single player for a couple races and noticed that while the initial load of the vehicle in the vehicle selection screen is long, the PS3 does cache the data so that going back and forth between vehicles is quick.

I also played for more than an hour online, and I have to say that online is a blast. I hosted the games I played, so I had full control over what track we raced on and many other parameters. Most importantly, I controlled when the game started. So I didn’t wait very long in the lobby before starting a race. That meant that the races typically contained only four players, but I didn’t want to wait around forever for new players to join. 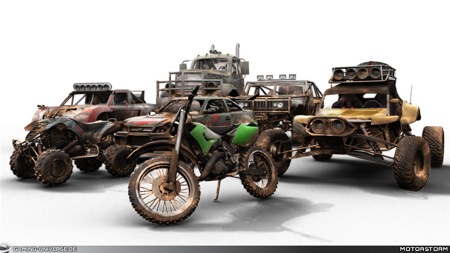 Even with four players, it was quite fun. My friend Ray from work was playing too, and we did the whole voice chat thing, which was great. He also beat me in most races, which wasn’t so great. 🙂

I’m starting to learn which tracks I like and which tracks I don’t. So far there is only one track that I don’t like much (I think it’s “The Grizzly”) mostly because it’s too short. There are some really really impressive tracks in this game. Tracks that make you think “AMAZING AMAZING AMAZING as you’re racing all the way through.

Previously I mentioned a bug where someone else’s name appeared above my vehicle. This didn’t happen to me yesterday, thankfully.

Even with all the problems I mentioned in yesterday’s post, I still think that MotorStorm is worth it. Playing online is a blast, and the tracks are stupdendously wonderful. You shouldn’t miss this, even with its quirks.

Disappointingly, the MotorStorm splitscreen petition is no longer there. I wonder what happened to that…

Why GTA 4 is not a timed PlayStation exclusive