First and second party titles and the PlayStation3

For a while now I have been thinking that Sony’s gaming future lies not just with the likes of GTA and MGS, but the first and second party titles they can produce.

For most of the existence of the PlayStation brand Sony has predominantly relied on high profile third party titles to build visibility in the marketplace. Here in the EU this started with titles like Wipeout on PSOne which, thanks to strategic marketing, grabbed clubbers with its dance soundtrack. Worldwide though, exclusives like the Final Fantasy series and Metal Gear Solid built up the PlayStation into the dominant platform, with developers attracted by the cheap cost of development and the possibilities of the CD format.

Sony repeated this with PS2, although there were already the first indications of Sony developing a first party portfolio; with Sega’s lack of success with the Dreamcast third party publishers and developers once again focused their attentions on the PlayStation format despite late arrivals from Microsoft and Nintendo. However, by the time the PlayStation 3 was announced Sony had significantly upped its first party content by buying up studios like Naughty Dog and established firm relationships with the likes of Insomniac and Evolution Studios.

Now, in the PlayStation 3 era the third party situation has become a lot more competitive. Sony has had to face the loss of titles that were previously exclusive to the PlayStation format as publishers seek to make their titles as profitable as possible by producing them for the (currently) more ubiquitous Xbox 360 and the cheaper to develop for, but very popular Wii. The most obvious recent example is Devil May Cry 4 becoming multi-format. I doubt it will be the last title either; it’s a sign of the $20million+ development cycle. So Sony is screwed right? 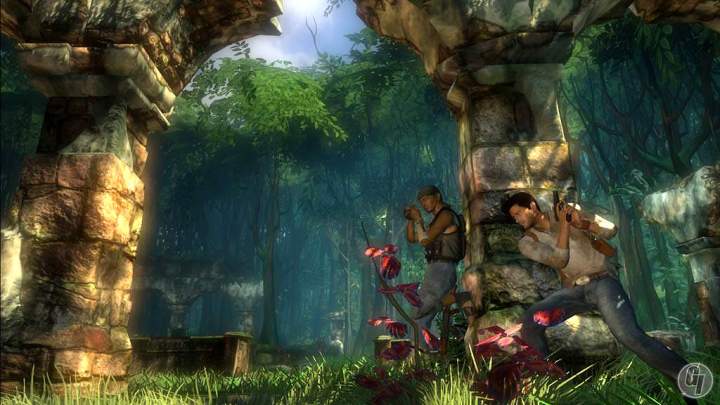 Wrong. Whilst it’s easy to point out where Microsoft’s major first party title is (yep, Halo) and Nintendo has a few (Mario- Super or Paper, Metroid, Zelda, Smash Bros, Pokemon and the incumbent WiiSports/WiiPlay series), Sony’s, whilst much harder to highlight, role call is impressive. One example, Uncharted: Drake’s Fortune pictured above, has huge potential. Other titles to watch out for this year are: Killzone, Ratchet and Clank Future, Singstar, Eye of Judgement, Lair, Warhawk, Heavenly Sword and Hot Shots Golf 5. But these are the ones we know about. It won’t be long until we see Gran Turismo 5, next-gen SOCOM, Syphon Filter, Wipeout (already confirmed), the Getaway, many more Eyetoy titles, the next full game from the God of War team, Team ICO’s next work as well as eventual sequels to Resistance and Motorstorm. So whilst Sony might not have the third party support all to themselves this time around, their first party lineup is much stronger.

What’s strange is that Sony seems so reluctant to showcase these titles. There are a lot of games in development, and I hope we see them sooner rather than later.

PS3’s Oblivion: Not so Impressed