There’s no doubt in my mind that I’ll be buying Ratchet and Clank Future: Tools of Destruction when it’s released, possibly later this year. The PS2 games had the right mix of crazy weapons, idiotic humour and fun platforming, whilst my girlfriend loved them because you collected stuff. 😐

There’s some new screens here for your viewing pleasure. The game is apparantley going to focus on Ratchet’s past and the history of Lombaxes in general. The only two new weapons that have been revealed are the Groovitron which is a disco ball that makes enemies make like John Travolta in Saturday Night Fever. There’s also a Tornado Launcher that you can control by using the SIXAXIS to move the Tornado around, sucking up enemies and causing as much damage as possible. Oh yes. 8) 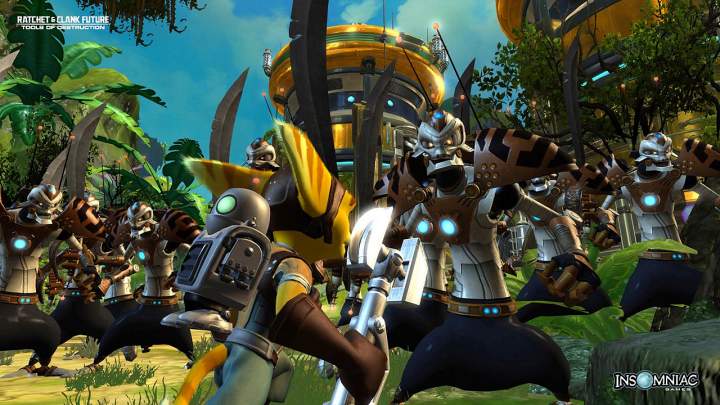 I’ve got to admit that the weapons in previous Ratchet and Clank games have been superb fun to use. Some of my personal faves include The Rift Inducer, Agents of Doom, Morph-O-Ray, Qwack-O-Ray and Sheepinator. 😆

It’s going to be great fun to see what crazy weapons Insomniac have thought up for their first outing on PS3. How about the Cat-O-Ray, which turns an enemy into a cat that latches onto any unaffected enemies faces causing them to run around in a blind panic trying to remove the cat?

I also can’t wait for some actual gameplay footage. I hope they release a demo on the PSN aswell, that would be awesome.