Haven’t we seen this before? Blasting little micro-organisms to little bitty pieces? I’ll forgive you if you’re confused, because this post is not about Blast Factor. It’s about another downloadable game, coming to a PS3 near you, called Nucleus. It’s developed by Kuju’s Surrey studio. 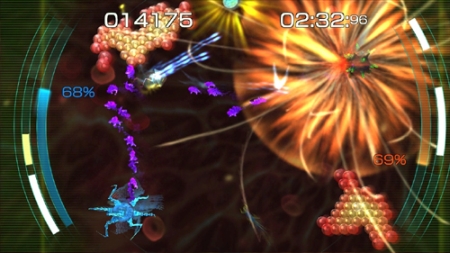 For instance, Nucleus doesn’t take place in outer space, but in “Inner Space” (no relation to the film, as far as we know). And instead of shooting aliens, you fight bacteria while swimming around blood cells and collecting proteins. Players control a “remote unit” which looks a bit like a sperm cell. It, ahem, squirts, shoots, and deploys protein bombs (once enough protein has been collected). To gain more protein, players need to shoot cells that release it.

I hope that this game is a lot better than Blast Factor was. It certainly looks prettier, and uses more of the screen. (That’s a pet peeve of mine about Blast Factor.) Truth to tell, I still like the look of Super Stardust HD better. We’ll have to see once these games come out…

No Damage in Gran Turismo 5?

PS2 Guitars on PS3, by RedOctance