Thanks to reader BÃ¸rt Erik SÃ¸rbo for sending this in! Sony announced theyir new next-gen EyeToy which unfortunately does not look to be HD in any way, shape or form. 🙁

[Kotaku is reporting that the release date for NA is this summer as well.] 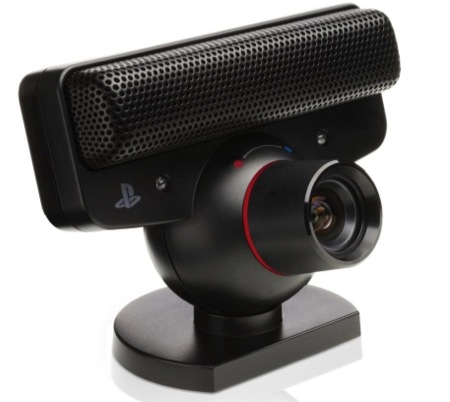 Scheduled for a Summer release in Europe, PLAYSTATION Eye is an essential accessory for voice, video chat and online gaming that will enable gamers to enjoy their PLAYSTATIONÂ®3 (PS3â„¢) experiences like never before.

Designed specifically for PS3 and featuring huge advances in USB camera and microphone technology, PLAYSTATION Eye is set to revolutionise the experience of online communication on the PLAYSTATIONÂ®Network. Expanding on the market-leading heritage of the EyeToyÂ® USB Camera for PlayStationÂ®2, the sophistication of the PLAYSTATION Eye naturally complements the advanced features and capabilities of PS3 â€“ all in one slickly designed, unobtrusive unit.

Designed specifically to work with the next generation of social gaming titles and new services being developed for PS3, key features of the PLAYSTATION Eye include:

* A sophisticated microphone with the ability to reduce background noise and focus on the spoken word for smoother, more accurate speech recognition and transfer
* The ability to capture videos and audio clips directly to your PS3â€™s hard disk drive
* Engineered to perform well even in low-light conditions
* A range of different capturing modes, including slow motion and time-lapse
* Faster frame rate for improved tracking, responsiveness and smoothness
* Two position zoom lens for close-up and full body options
* A range of eye-catching visual effects to apply to photos and videos
* Bundled with EyeCreateâ„¢ editing software, which allows users to save and edit photos, video and audio clips

David Reeves, President of Sony Computer Entertainment Europe said, â€œPLAYSTATION Eye is a great example of how we have moved forward so significantly with our technology. PLAYSTATION Eye has four times the resolution, twice the framerate and double the sensitivity of its predecessor EyeToy USB Camera. With the technology that we now have at our disposal we will be able to dramatically improve the communications experience enjoyed on PS3â€. EyeCreate software EyeCreate editing software, bundled free with PLAYSTATION Eye allows you to save photos, video and audio clips to your PS3 hard disk drive and apply eye-catching visual effects to your images. Different capture modes like time-lapse and slow motion open up a world of possibilities to be explored further in EyeCreateâ€™s editing suite, where you can turn your media into professional looking movies.

An all-new four microphone array, incorporating multidirectional voice location tracking, enhanced echo cancelling and background noise suppression allows for clear audio chat in even the most noisy of environments, without the need to hold or wear a headset.

A frame rate of up to 120 frames per second allows for super-smooth video and sophisticated low-light operation means that the room doesnâ€™t have to be brightly lit for the camera to deliver crisp, perfectly exposed video. The adjustable zoom lens features a 56Âº field of view to capture head and shoulders action for close-in audio-visual chat, and a 75Âº field of view to capture the whole body for a fully physical gaming experience.