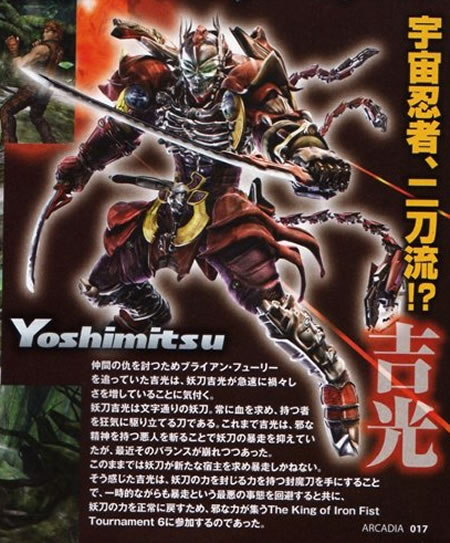 I’m excited to try out Yoshimitsu’s dual blades! Hopefully in Tekken 6 he’ll finally be able to use his swords more than before. Makes you wonder what his “item move” is.

The 5th King of the Iron Fist Tournament has ended with Heihachi Mishima missing and the eventual winner being Jin Kazama.

Jin Kazama then assumes the role as head of the Mishima Zaibatsu and begins using the special Tekken force units for propaganda and manipulative acts all over the world. Eventually many people become upset by this and it starts riots and eventually war amongst nations.

With the world now at war, many nations lose their power and the Mishima Zaibatsu declares itself as an independent nation.

The Mishima Zaibatsu is intent on conquering the world with only G Corporation to stand in its way. People around the world see G Corporation as a savior and G Corporation offers a price on Jin Kazama to anyone that can bring him in alive.

Just as anyone could have expected, the announced for the 6th King of Iron Fist Tournament was under way.

Those that want to make a name for themselves, those that seek money, and those that want revenge. Many different ideals and goals gather while the Tekken 6 tournament is unveiled.

Tekken 6 storyline and some bios