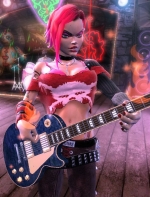 IGN has a small preview of Guitar Hero III (GH3) for the PS3. First off, you’ll be happy to know that the controller will be wireless and will also be very similar to the 360’s guitar controller, also wireless.

The interesting thing for me was that when Activision bought RedOctane, they didn’t get the source code to Guitar Hero II in the process. Activision has given the GH3’s reigns over to an internal studio – Neversoft. But they didn’t get any source code, so they have to write the whole game from scratch. Which sounds both strange and like a lot of work. Which makes me wonder how they could get the game out in time for this Christmas. Something sounds fishy…

At any rate, the game will feature more original tracks than ever (as opposed to cover versions). Hopefully they’ll also improve the song selections. I much preferred the song list is GH1 over that in GH2.