We’ve previously heard of these as “Untitled Whimsical MMO” and “Untitled Mercenary/Espionage MMO”. Now they both have actual titles and details.

Free Realms (aka the Whimsical MMO)

“Our big goals with the game are whimsy and accessibility. User-generated content: I want to get it out of the space of buzzwords and into the game. Everybody talks about it, but it’s hard to pin down,” asserted Smedley. “I’d rather give people some lines, and say ‘color inside these any way you want.’ Then you can’t just generate whatever you want, but you have users creating content themed towards our goals.”

The Agency (aka the Mercenary/Espionage MMO) 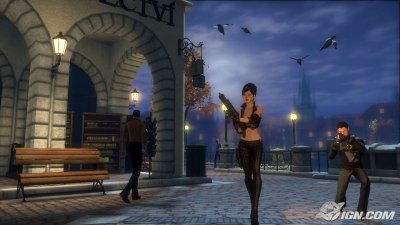 When starting the game players will pick between Unite, a traditional James Bond type of spy outfit, and Paragon, a brasher, up-front type of organization. Through them you’ll get early missions for rewards and rise in rank, but eventually the goal is to break out and start your own organization.

Both game concepts sound both original and effective. So far, almost all the titles that we’ve seen on the PS3/360/Wii have been highly derivative. There has been some excellent content, and some definite innovation, but almost everything has fallen into very well established game types. It’s nice to see some developers aiming for genuinely new game concepts.

Some people complain about lack of innovation in games and I think they are way off. I bet we will look back upon this time period in history as a rapid evolution in games.

Rock Band – Can Use GH Controllers