Yeah, I had to think long and hard about the title to this post. 🙂 But it’s true!

I was away from Thursday night to Monday, so I couldn’t use my PS3 or blog or anything! What a shame. But Monday evening I downloaded Super Stardust HD for my PS3, and man it took a long time to download. Usually my PSN downloads are pretty quick, but this one took almost an hour (I think…). 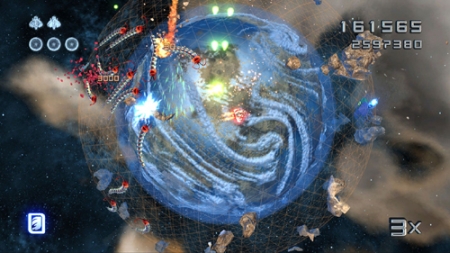 Anyway, I started up the game and I have to say it’s quite fun. You don’t die instantly in the first 5 seconds, which is great. I actually scored more than a million points on my first go, though I’ve been having trouble duplicating that feat!

The huge arsteroids are fun to destroy. It really seems to matter how you hit them with your weapons, and they break up differently depending on what you do. It’s a little hard to tell the different asteroid types apart, though.

My favourite weapon is fast becoming the gold melter thingy. It’s not as powerful, it seems, but it’s a lot more fun. One very cool thing about the game is that you keep your powerups even after you die. Wonderful.

I tried the co-op mode with my daughter, but she quickly gave up. I’ll have to try it again later with someone who cares. 🙂

I do wish, however, that game levels would end when you clear the planet. It would be a lot more satisfying, and I never understand why I complete a level.