The creator of Katamari Damacy is working on a new game announced for the PS3, “Nobi Nobi Boy”. 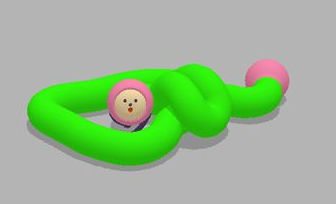 I’m very happy that we get a new game from the same creator, rather than merely a Katamari sequel. As much as I loved Katamari, it wasn’t a good fit for a long-running franchise with lots of sequels. I’d much rather see the same quirky creativity applied to a completely new concept.

On the downside, that picture looks kind of lame. Obviously, it’s merely a single asset shot taken out of context of the overall forthcoming game. However, I still would have preferred if they left that to the imagination.

Just for fun, scroll down, look at the picture in the GT5 Prologue post and scroll back to this post: not pretty. Regardless, I’m still looking forward to this..