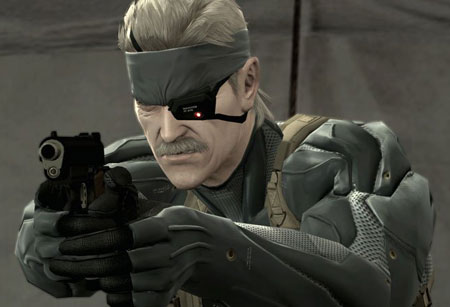 At the PlayStation event in Tokyo, Kojima shows off Metal Gear Solid 4 in a real-time demo, which lasted 20 minutes. It began in the same middle eastern area as the other MSG4 trailers. Even when Snake zoomed in on the wall using his scope other known as “Solid Eye”, and even up close the was little or no pixilation.

Instead of snake fighting a huge army as in previous MGS titles. In MSG4 there are professional PMC (Private Military Company) mercenaries, and civilian guerrillas, who were losing because they were less experienced. But it’s up to you which side to help out. Or you can be just be a loner and kill everyone, up to you. The PMC soldiers are harder to spot due to them wearing beige camouflage. So Kojima had snake switch to the thermal goggles to detect them, and switched to the normal scope to zoom in.

Hopping down the building from where Snake started, the aged soldier approached a set of familiar bronze statues last seen in the Tokyo Game Show trailer. Here, Kojima went to the menu screen and selected the active camouflage option, where players can access disguises for Snake’s face and body. Snake normally wears an all-purpose “Octo-Cam” camouflage suit, which lets him blend into his surroundings. However, apparently there are other selectable camouflage patterns in the game, one of which is called the “Statue-Cam.” Kojima selected the Statue-Cam and an appropriate face mask, and–voila!–Snake’s camouflage suit displayed a bronze finish. The PMC soldiers then walked by, mistaking the grizzled commando for a statue.

Snake’s Octo-Cam camouflage will blend into his surroundings, semi-automatically. When you hug a wall or on the floor, the suit changes automatically to the pattern of the surface that it’s touching. When Snake takes out a soldier using close-quarter combat (CQC), the soldier drops his gun, and he can take the weapon from the soldier, a new element in MGS4. You can take enemy weapons using a holdup too. During the holdup the soldier raised both of his hands in the air, dropping his weapon, and starts shivering, it looks more realistic than in the past. Snake can frisk enemy’s for items too.

Snake also has a new move, a death grip to the enemy’s crotch, which of course would knock the person unconscious in an instant. Another way to take out enemy soldiers is the stun knife than can discharge electricity. You can zap the enemy to knock them out or it can be fatal if you slash them. Taking place of the cardboard box is the oil barrel. It’s more resistant to bullets, but it’s not as stealthy as the classic cardboard box. You can hear Snake’s knees banging into it as he walked. But you can use the oil barrel as weapon, you can roll on the ground inside it, taking out soldiers in his way. Snake of course gets very dizzy after this and throws up, lol.

Kojima said you can play the whole game in first-person view, and you can you the Sixaxis to duck and peek around corners. But the game will default to the third person view like the previous MGS games.

You can select the MKII (the little remote control robot) from the item inventory, the player can take control of it in either first or third person view. You can take out enemy’s with a zap of electricity, or you can just use it to scout out the area. What’s funny is when Snake is controlling the MKII if you look at him he is holding the MKII’s remote controller which is a Sixaxis, lol. Remember way back when there was a rumor that you could control the MKII with a PSP? I think that would be fun.

Snake can hide in a dumpster, but be careful. If you are in there to long you will start to stink, and when you get out Snake is surrounded by a swarm of flies, and you shake the sixaxis to swat them away. Since you stink from the dumpster your enemies may notice you more.

Sadly there isn’t of video of this 20 minute demo. But I’ll keep my eyes open.