Every once in a while I see an image that I just like to stare at for a while. The image is so fascinating in its detail, that I get lost tracing out patterns and geometries. That’s what happened when I first saw an image of PixelJunk Racers, an upcoming PSN title for the PS3: 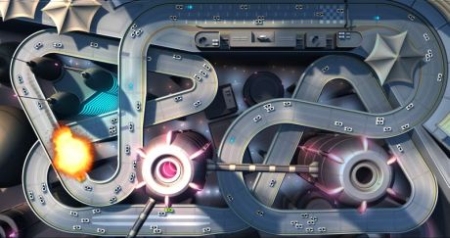 At first you have to wonder. “How the heck will they make an interesting game out of that?” But on the other hand, the screenshot is so fascinating that you hope, deep down inside, that they succeed.

And according to Joystiq, they have. Joystiq (the lucky bums) got to try out this game and they think it’s quite fun. There’s more to it than just racing around a track. The game has a gazillion plus one different modes to keep you entertained.

Even still, I didn’t “get it” until I saw it in action. I downloaded a video of this game being played and had that “aha!” moment that made me think that this game does indeed have potential. Unfortunately, I can’t find the original site where I downloaded the video from. Can anybody help me?

Found it! I thought it was from IGN, but when I looked for the game under “Previews” it wasn’t there. I shoulda looked under “Game Profiles”. Ah well. Here’s the link to some images and video: