I waffle about Sony’s new PS3 app, Home. Mind you, I am not part of the beta, so my impressions are of an outsider looking through the shop window. Sometimes I stare fascinated, while others times I’m inclined to keep walking. Nothing special to see. 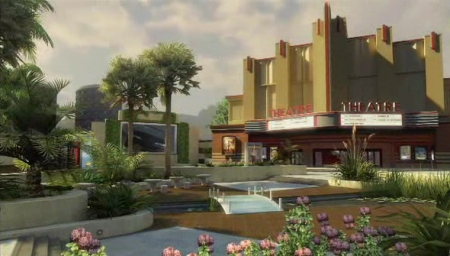 To be perfectly honest, I don’t think that I’ll be spending a lot of time in my Home apartment. I just don’t see that there’s anything to do there. Sure, I can drop in some furniture, play some video on the walls, and subject visitors to my special brand of symphonic metal music. But what is there to do there, really? There doesn’t seem to be much. So when I think of this, I start to wonder if Home is really just a too-hyped service that’ll find some use and provide a little bit of entertainment, but that isn’t such a big deal.

Other times, though, I wonder about some other possibilities. About what can happen outside of your own little space in Home. This is where the potential lies, if you ask me.

Pretend that Sony wants to show off a new villain that they’ve created for the upcoming game Killzone. Imagine walking into the Sony Killzone room to discover him standing before you, menacing you with his face-melter sub-uber-machine degelinizer. You jump over to a display nearby which gives all the relevant facts. This dude has hated you personally ever since you beat him to the watering fountain in grade one. This made him into the Helghast sympathizer you see standing before you. Then you walk over to a wall where you watch a video of him in action. Yikes! A terrible foe, of course, but beatable. Then you step into the next room which is actually a part of Killzone level 3 which they showed at the recent E3 show. You walk through the game level like Captain Picard on a holodeck. Exit through the another door, and you’re back in the Killzone lobby where you can clink on a link to pre-order the game. Or step into another room where you meet up with some friends and go play the game online.

What Home really needs is for developers to really get behind the concept and offer spaces for you to visit that draw you into the games they want to sell. I don’t think it would be too hard, and the payoff would be great. It’s like another version of the the world wide web, but in the 3D and gaming only. Which is handy, because 3D and games are like peanut butter and jelly.

Chronicles of Teddy: Harmony of Exidus To Be Released By Aksys Games This Fall... July 24, 2015 | EdEN