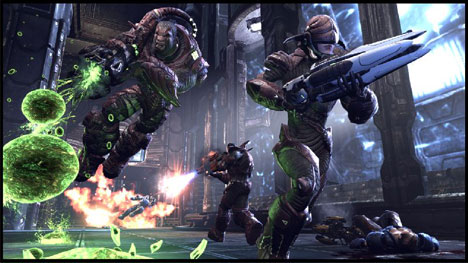 Some things that stood out in the interview is that the PS3 will support total conversion mods. Which means anything created on the PC will work with the PS3. But if you want to create content you’ll need to buy the PC version. But if you just want to play the mods you’ll just need a PS3. I would assume most of the mods will be free too.

You’ll be able to host a dedicated server on the PC, Mac or Linux. Also the game will run at 720p. He mentioned that they’ll make a UT3 environment in Home. That sounds very cool, wonder what it will look like. The release date will be simultaneous for Europe and America, they are shooting for November.

It took us a year after Xbox 360 and here we are less than a year after PlayStation 3 and I’d say that today Unreal Tournament 3 runs better on PS3 than Gears did on Xbox 360 at the same point in its development. So, that bodes well for how well the engine will run on PS3 as we’re already ahead of where I thought we’d be in terms of optimizations.

That’s good to hear that it’s coming along nicely. This will be a great LAN party game come this holiday season 🙂

GH3: Through the Fire and Flames September 5, 2007 | Blackstaffer