PS3 Finally Outsells the 360 for the Month of July! 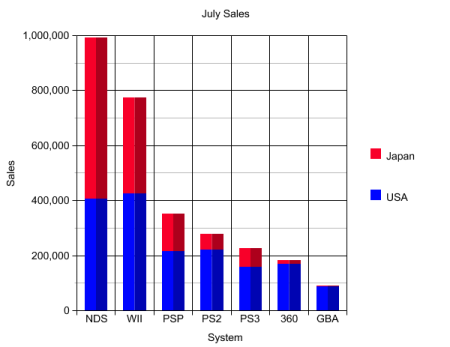 This only includes US + Japan data since that is all that I could easily get a hold of. US Data from NPD. Japan Data from Media Create weekly data from 7/2-7/29

Admittedly, this was a strong PS3 month with an amazing E3 show and a much needed price drop and a weak 360 month, where talk of hardware failures was at an all time high and rumored price cuts were on the way. Game releases for both systems were rather light. However, we’ll take whatever good news we can get. And as always, PS2/PSP are healthily ahead of both PS3/360 and Nintendo’s DS and Wii have a huge lead over everything else.